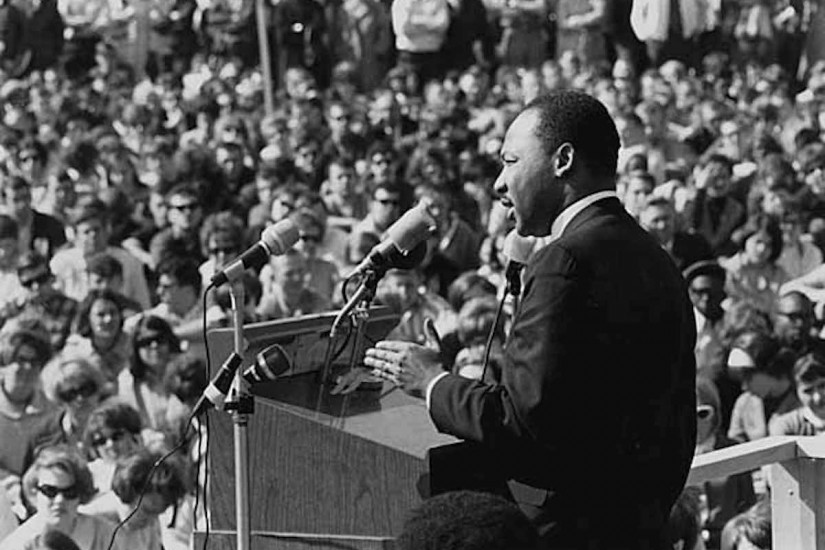 Martin Luther King Jr. in a speech at the St. Paul Campus of the University of Minnesota, in which he criticized the war in Vietnam (1967).
Minnesota Historical Society
…

In the years before the Civil War, Americans were embroiled in another moral and political crisis: the conflict over the future of slavery. Then, as now, the heated political showdown made people uncomfortable. In an attempt to avoid this discomfort, many hoped to navigate the crisis as neutral parties, taking a “very fine people on both sides” approach to the slavery debate. But as it turned out, remaining neutral in the end amounted to defending slavery.

Neutrality was particularly appealing in places that were deeply politically divided. During the slavery debates and then the Civil War, the border states were the most divided part of a divided nation. Abolitionists, pro-slavery advocates, Unionists and Confederate sympathizers all rubbed shoulders, and sometimes came to blows.

Churches in particular bore the brunt of the region’s divisions. Congregations erupted into chaos, first over slavery and then over secession. The clergy who led these congregations, desperate to keep them together, often attempted a strategy of neutrality. They argued that slavery was a purely political issue, not a moral concern. They rejected abolitionism as unseemly radicalism, and they congratulated themselves for standing above the fray. As one Kentucky Presbyterian put it, “By our superior moderation [we] put ourselves clearly in the right.”

Their story illustrates both the appeal and the folly of such an approach.

Time and again, white clergy on the border pointed to the heated debate over slavery, rather than slavery itself, as the major problem facing the nation. They were concerned more with preserving civility and harmony in their congregations than they were with human liberty or the evil of slavery. To maintain harmony, they discouraged abolitionism as too extreme and argued that the church had no place promoting equality and freedom or opposing racism and slavery.

In theory, this was neutrality. In practice, it was pro-slavery. Despite the efforts of abolitionists, the laws of the United States protected slavery. Avoiding the subject helped to keep slavery alive.

When slaveholding states responded to the election of Abraham Lincoln by seceding from the Union, internal conflict only escalated in border-state churches. Unionists and Confederate sympathizers clashed in the pews. Again, clergy sought to remain neutral in hopes of forestalling conflict. But neutrality — and the pretext it was built upon — could not survive the end of war. Confederate defeat and the abolition of slavery eliminated the possibility of neutrality for border clergy.

Having insisted on the moral superiority of neutrality for decades, border clergy found it hard to drop their stance, even with slavery abolished. After years of insisting that their moderation gave them the moral high ground, these neutral clergy felt victimized when their churches finally acknowledged that slavery was a sin.