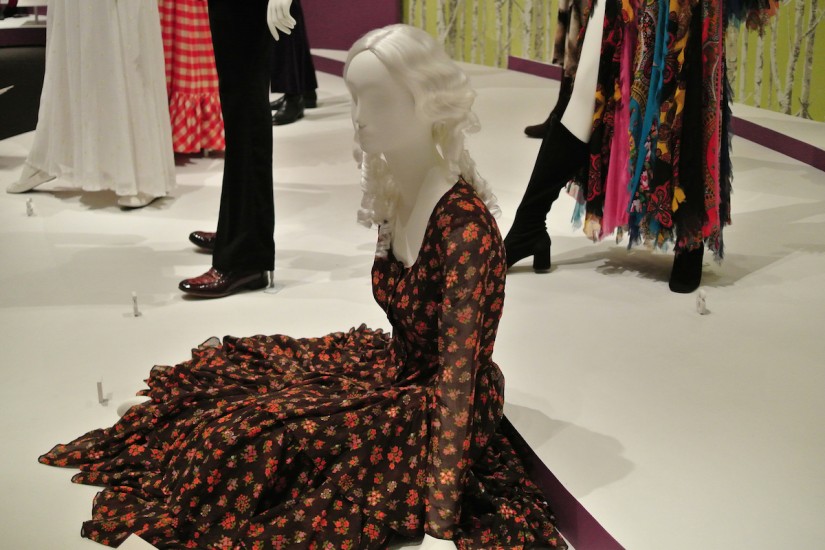 The dresses evoke a certain nostalgia, a throwback to a time when femininity and women’s identity was sharply defined and didn’t have to be individually conjured or chosen. One was a homemaker, in the literal sense of making a home from scratch, and a wife, mother, and defender of the family. There’s a comforting familiarity to it. Lena Dunham told the New Yorker, “They really look like […] the dresses that characters in your favorite book would have worn.”

It’s a pleasant thought. But in Dunham’s likely “favorite book,” Ma is also startlingly, overtly racist, in ways that are inextricable from her brand of frontier femininity. “Why don’t you like Indians?” Laura asks her over corn cakes and molasses on the steps of their covered wagon, which Ma had laid out like a table, complete with a centerpiece of flowers in a tin can. “I just don’t like them,” Ma replies. “And don’t lick your fingers, Laura.”

Anyway, Ma assures her, “the Indians would not be here long.” The government would soon push the Native people west, she explained, once white settlers arrived. In moments like this, Ma is as active in developing her daughters’ racism and sense of ownership over the land—land that we now know the Ingalls family had no legal, let alone historical, right to claim—as she is in shaping their notions of how women should act, work, and dress.

This is no contradiction. Clothing is a civilizing force in Ma’s mind, one that serves to separate her children from the Native people they encounter. The bonnets she makes her girls wear are intended to protect their skin from darkening in the prairie sun. “I declare,” Ma says, “if you girls aren’t getting to look like Indians! Can I never teach you to keep your sunbonnets on?” When she interacts with Native people, Ma is first and foremost horrified at the perceived inappropriateness of their dress. “They wore fresh skunk skins,” she tells Pa, “and that’s all they wore.” One evening, as she prepares dinner in her newly-built house on land the Osage retained in a Reconstruction-era treaty with the federal government, Ma complains without irony, “Indians are getting so thick around here that I can’t look up without seeing one.”

Yet the resurgence of the prairie dress, and of the frontier femininity it represents, is shorn entirely of the racism and colonial entitlement it once cloaked. Recent reporting has remarked on a resurgence of the “traditional,” in dressing styles, gender roles, and ways of living, perhaps as a reaction among progressive urban-dwellers to the anonymity and economic, cultural, and political demands placed on them by modern life. The mythology of the homesteading woman is infused with just enough adventure, strength, and pluck to make its version of womanhood appealing to women who have rejected other models, in particular, the post-war-era American ideal of the suburban wife and mother. It is internalized as feminism: one that claims a traditional appearance and traditional role as a radical act.