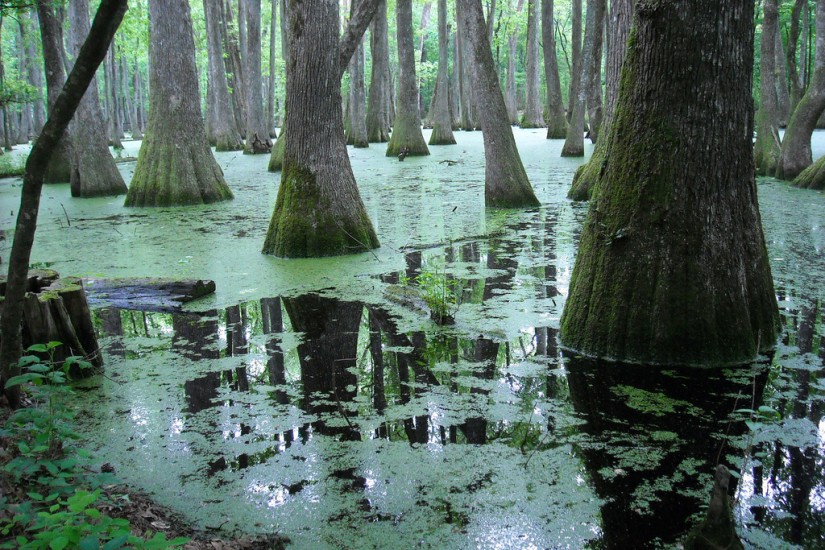 The composition of the Confederate Army changed a year into the Civil War when the Confederacy began conscripting its soldiers. Poor whites immediately became the primary targets of the draft. This fact, coupled with the so-called “Twenty Negro Act,” which exempted from military service anyone who owned more than nineteen slaves, brought mounting class tensions closer to a head. Non-slaveholders accused the Confederacy of waging “a rich man’s war and a poor man’s fight.”

The law’s blatant protection and privileging of the region’s wealthiest slave owners surely spurred more rounds of mass desertion. Elsie Posey, who spent her childhood enslaved in Mississippi, reported that the Twenty Negro Act “account[ed] for Jones County’s record as the ‘Free State of Jones’ and for Covington County’s famous ‘Deserter’s End Lake.’”

As early as 1862, deserters in Georgia scattered through the heavily forested area west of the Ocmulgee River. A few years later, the entire area was in open revolt. Gum Swamp, another densely wooded area, provided another refuge. Since Confederate troops could not easily traverse the swamps or make it out to the small islands the deserters inhabited, they instead stole the men’s guns and horses and occasionally harassed their families.

Deserters took over several small islands along the Mississippi River. The once-enslaved Holt Collier recalled that a white “bandit named Coe settled on” Island No. 76 near Bolivar, Mississippi. (It’s no longer on the river thanks to a cutoff constructed by the Army Corps of Engineers; it now abuts Lake Whittington.) Coe apparently “gathered around him a large number of negroes. He became a terror to all the neighboring country. He and the negroes descended on the plantations and carried off everything.” But according to Collier, Coe was far from unique, for “there were also other renegade white men with him whose names I will not mention.”

Indeed, many non-slaveholders joined anti-war organizations, while others formed semi-violent “tory” or “layout gangs.” These bands of men could be highly destructive to the South’s infrastructure, burning bridges, jails, and government buildings, attacking supply trains, and generally stealing from plantations whenever they got the chance. Emboldened anti-Confederates even began harassing conscript officers and other government officials. According to David Williams, by 1864 these men had “all but eliminated Confederate control” in the Deep South’s hills, mountains, piney woods, and swamps.