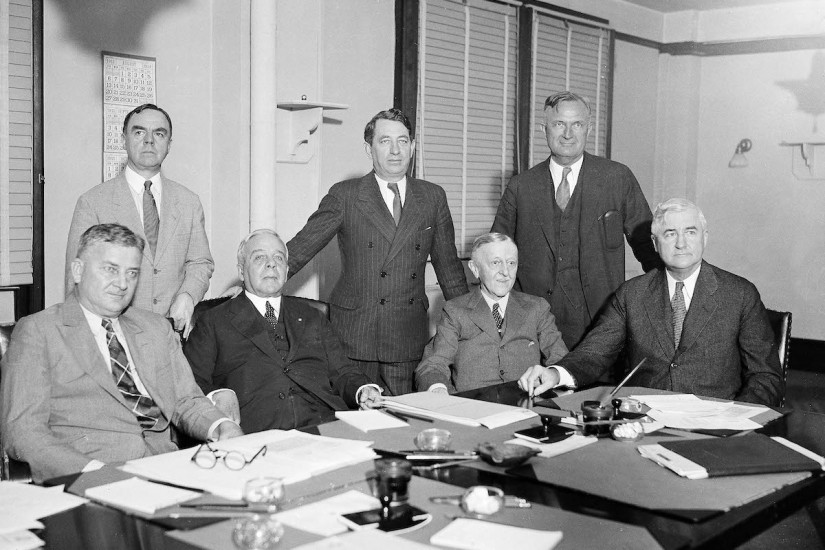 The board of directors of the Reconstruction Finance Corporation are seen in New York, Sept. 25, 1933.
AP Photo/Jacquelyn Martin
…
The story about the New Deal we have in our heads—that it was tax-and-spend liberalism at its worst (if you are conservative) or best (if you are liberal)—may obscure policy opportunities today. We can spend taxpayer money to address climate change, and we probably should, but that is not the only option. If we are going to fund a Green New Deal, we need to acknowledge how the original New Deal actually worked.

After the stock-market crash of 1929 and the mortgage crisis of 1932, bankers’ capital sat idle. “Our excess reserves are very big,” James Perkins, the head of National City Bank wrote to his colleague Amadeo Giannini, the head of Bank of America in 1934, and “it is almost impossible to find any use for money in credits that we are willing to take, and the rates are terribly low.” Perkins’s situation was not unusual. According to Perkins, excess reserves across the country totaled more than $1 billion (in 1934 dollars). The country’s banks and corporate coffers overflowed with capital that financiers felt unable to invest profitably. Without an outlet for those funds, even the still solvent banks would fall apart eventually—and so would the country. Capitalism depends on the investment and reinvestment of capital. President Franklin D. Roosevelt’s genius was that he knew he had to get capitalism moving again. But the man who actually figured out how to do that was, ironically, inherited from the Hoover administration: Jesse Jones.

Under Hoover, Jones was appointed to the Reconstruction Finance Corporation, which was tasked with recapitalizing regional banks. Like the other men on Hoover’s RFC, Jones was a banker—he was president of the Texas Commerce Bank system—but he was also a prominent real-estate developer and an original investor in the company that became Exxon. When FDR came to power, he promoted Jones, who had been a Democrat since the heady populist days of William Jennings Bryan, to the head of the RFC. Jones understood well the need to take risks, and how risk-averse the world of finance had become during the Depression; his basic mission was to restore safe, long-term investment opportunities.