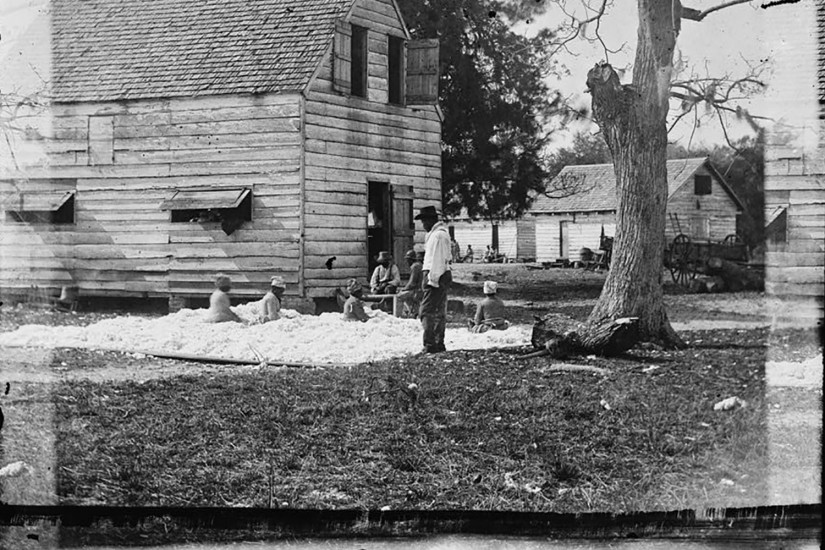 ... plantation, accompanied by a hand-drawn map indicating how they would share the parcels as a community: Katherine Franke/The National Archives and Records AdministrationLand Claim for the Pleasant Point Plantation from records of the Internal Revenue Service (Record Group 58), January 29, 1864

... plantation, accompanied by a hand-drawn map indicating how they would share the parcels as a community: Katherine Franke/The National Archives and Records AdministrationLand Claim for the Pleasant Point Plantation from records of the Internal Revenue Service (Record Group 58), January 29, 1864

At the land auctions, formerly enslaved people also acquired implements and farm animals needed to work the land. It was reported that three black men bought a horse at auction and then, thumbing their noses at their former owners, named it “massa”!

This historic enterprise of reparative justice came to an abrupt end after President Lincoln was assassinated and Andrew Johnson, a known slavery sympathizer, assumed the presidency of the United States. Johnson vetoed a bill Congress sent to his desk that would have formalized the allocation of land to newly freed black people as reparations, and he granted amnesty to the former Southern Confederate landowners by signing an “Iron Clad Oath” that restored “all rights of property, except as to slaves.”

In this way, the land that had been set aside and granted to freed people to begin a new life was seized from them, often violently, and returned to their former owners, even though, in many cases, they had paid for title to the land at public auction. Freed people were then forced to enter into contract labor arrangements with plantation owners that bore a greater resemblance to slave labor than to freedom. Without land or other resources, newly freed people were rendered completely vulnerable to the whims and interests of the very white people who regarded them more as property to be used and exploited than as people who bore rights and dignity.

The disestablishment of the institution of slavery released millions of people from bondage, but it did little to redress the horror of slavery itself. That horror stretched backward to include the loss of dignity, forced labor, family separation, sexual exploitation, human commodification, and the sheer sadism enslavement entailed, and reached forward to mark black people as inferior, relegating them to a second-rate form of freedom. What enslaved people got when they were emancipated was freedom on the cheap. The dangling “d” at the end of “free” stood for the residue of enslavement that bound them to a past, marking their future as freed, not free, people. It reinforced a racial hierarchy in which freedom for the formerly enslaved meant something different, and worse, than it did for white people as a matter of natural, or God’s, law.

It is both the promise and the failure of reparation in the 1860s that should animate a return to reparations now, not in the form of individual cash grants but through collective resource redistribution. Structural, comprehensive, and enduring reparation is required to address the wounds of the past and to ameliorate the entrenched social, political, economic, and legal status of freed people as something less than white people.

Unfortunately, what might have been the right thing to do in 1865 would be impossible or unwise to do now. Even though freed people were entitled to land in 1865, it is inconceivable to imagine a scenario today in which the land set aside by General Sherman’s Special Field Order No. 15 would be ...