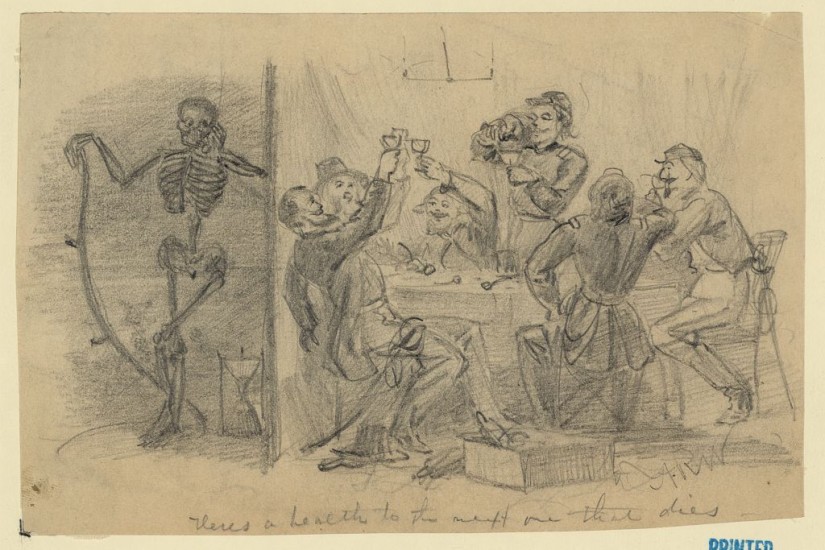 A drawing of Civil War soldiers toasting each other around a table as death, in the form of a skeleton, waits outside the tent (c. 1863).
Alfred Waud/Library of Congress
…

Causation was perhaps the greatest challenge in writing about historical cases of suicide. How can we ever truly know why someone, 150 years ago, took his or her own life? But the backdrop or historical context for most of these suicides was the Civil War. It was the one thing they had in common. Yet, who’s to say that even though a soldier killed himself following a battle that there wasn’t some other non-war related trigger?

Maybe he’d just received a letter that his betrothed had jilted him. Or that his beloved wife and child had died. I really struggled for a long time about how to talk about causation and suicide. In the end, I concluded that the etiology of any behavior is extremely difficult and the best we can ever hope to achieve is the proximate causes for a behavior, but that war, the Civil War in this case, stands out as a major factor. Even when the war was not a direct cause of a suicide, the war clearly exacerbated or shaped the decision to kill oneself.

In the case of Eliza, there were many factors in her personal history, any one of which might have been solely or primarily responsible for her melancholy and suicidal disposition: heredity, the deaths of her brothers in the war, the strain of her husband being in the war and his being wounded, a postpartum disorder, or her husband being charged after the war with raping their daughter. We don’t know for sure. That said, the war and the exigencies of war certainly didn’t make things easy or better.

Sarah: You make it clear that the war had a wide-reaching impact, even for those who didn’t serve in uniform. For instance, when Ella Gertrude Clanton Thomas says in 1870 that she loves her children more than she did before the war, you explain that the very experience of mourning a child changed because of the trauma of the war. How did you come to the conclusion that the war had this broad affect?

Diane: Recent scholarship, say in the last 10 or so years, on war and society, the cultural turn of the study of the Civil War, has taken as its focus myriad topics that illustrate the broader impact of the war on the lives of Americans, soldiers, civilians, and the enslaved. Historians have been doing deep dives in areas that shine a light on the many ways war affected its participants, starting with Drew Faust’s This Republic of Suffering (2008). The collective scholarship, mine included, suggests we historians have only just begun to assess the human costs of the Civil War. That assessment, to my mind, comes into stark and dramatic focus when we linger over the lives of ordinary individuals and the many ways, small and large, that civil war changed them.