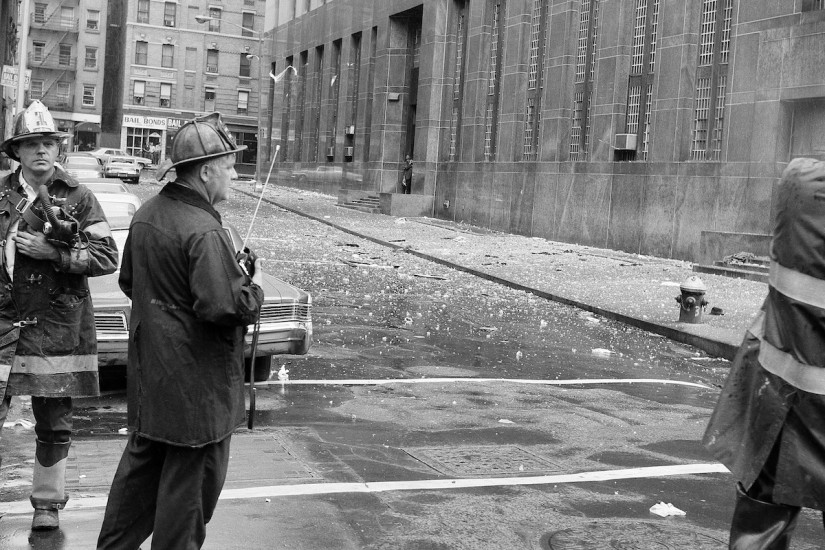 A New York City firefighter stands in the street outside Manhattan Men's Prison, known as "the Tombs," Aug. 11, 1970, during a riot on all 12 floors of the building.
AP Photo
…

The Tombs had been designed to hold a maximum of 932 men—and yet, on this hot summer weekend, it was 213 percent over capacity. Three or four men had been jammed into each of the facility’s tiny cells, which were meant to hold no more than two people. Those last into the cells were often forced to sleep on the dirty concrete floor, at times without bedding, alongside the roaches and rats that nested there. Infestations of body lice were common and showers rare, as the jail lacked adequate bathing facilities. As one man who “hadn’t showered in a week” reported, even when the guards finally allowed him to clean up, he still had to put on the same clothes in which he’d been arrested. “They stunk,” he said. “No matter how clean I was, I still stunk.”

This man, like virtually all the others crammed into this jail, was forced to live in such squalor because he hadn’t been able to afford bail as he awaited arraignment or trial. By August of 1970, a full 8,000 men had been sitting in New York’s various city jails for months without ever seeing a judge. One of them, Junius Avery, spent 37 months in the Tombs before learning that his case was being dismissed. He had spent this time in jail after being charged with burglary, and only because he had no way of meeting bail, which had been set at $5,000.

If most New Yorkers had no clue about the horror that was the Tombs, Mayor John Lindsay could claim no such ignorance: He’d been made well aware of how abysmal the conditions were there, as well as how imposing a problem the cash-bail system was for so many in his city. One state senator, John Dunne, had toured nine city jails, as well as 22 county facilities and four upstate penitentiaries, just a year earlier, and had offered the mayor his findings: a scathing report on the conditions, alarming rates of suicide, and compromised constitutional rights that had come to define the city’s jails. And by at least December of 1969, Lindsay had been thoroughly briefed on the depth of this human-rights crisis. That month, he had received a follow-up visit from Dunne, who insisted that the city needed to act immediately on behalf of the thousands of people who were trapped in one of New York’s many jails.

That the Tombs erupted less than a year later made it clear how little had been done despite Dunne’s efforts, as well as those of countless men and women who had experienced the city’s criminal-justice system firsthand. Even so, state and local officials failed to recognize the August 1970 uprising—in which men took their guards hostage and agreed to release them only after officials promised to remedy their conditions—as the wake-up call it was.