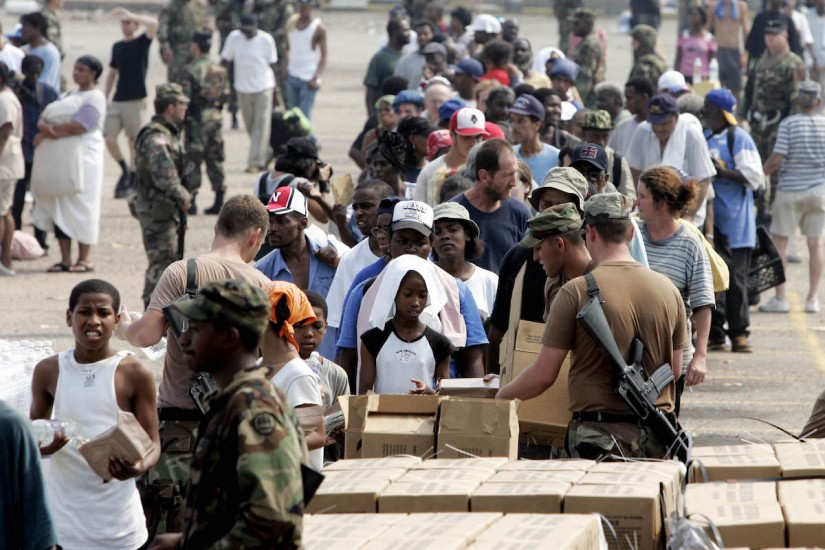 Wars and storms have a way of getting ensnared. Nobody knew this better than the National Guard. It had long held a portfolio of tasks crammed with unlike things: storms, protests, fires, uprisings, wars. At the start of the Iraq war, the Defense Department had mobilized guard forces on a scale not seen since World War II. “The day of [the] National Guard standing back and concerning itself with riots and natural disasters is a thing of the past,” said Brig. Gen. Glenn K. Rieth, adjutant general of the New Jersey Guard, a month prior to the invasion. As of September 2005, about 175,000 National Guardsmen had been called to active duty, about 40 percent of the guard’s total forces; they made up about 15 percent of the troops in Iraq and Afghanistan. Their mission took its toll at home. Guardsmen anticipated six-month stints—maybe a year—but sometimes found their missions drawn out further, in a few cases as long as 20 months. Spc. John Blanchett of the Illinois Guard told a reporter his platoon had been about to return home after a 447-day deployment when the Pentagon decided abruptly, at midnight on Easter Sunday, to keep them in-country. Most of their belongings had already been shipped home. “Don’t get me wrong,” Blanchett said, “we’re all doing our job for the country. We’re just tired as hell.”

Administration officials offered assurances that the wars were not impairing Americans’ safety. To the contrary, they were the only way to protect the country. “We’re taking the fight to the terrorists abroad so we don’t have to face them here at home,” declared President Bush. The idea of overseas war as the guarantor of security at home sidestepped the question of trade-offs between a nation’s wars and its welfare, but it was logical-sounding, and comforting, to many at the time.

Even so, a year into the Iraq war, guard leaders and governors across the political spectrum were warning that state guard units had been dangerously thinned out by overseas deployment. Officials feared being “caught short-handed if an emergency flares up,” according to the Associated Press. The bland bureaucratese of an April 2004 report by the General Accounting Office did not hide harsh conclusions: Overseas missions were draining the guard of its troops, particularly in expert specialties. Fifteen states had 40 percent or more of their Army National Guard soldiers mobilized or deployed, and some as many as one-third of their Air National Guard units. With 59 percent of its guard alerted, mobilized, or deployed, hurricane-prone Louisiana had the third-highest rate in the country.