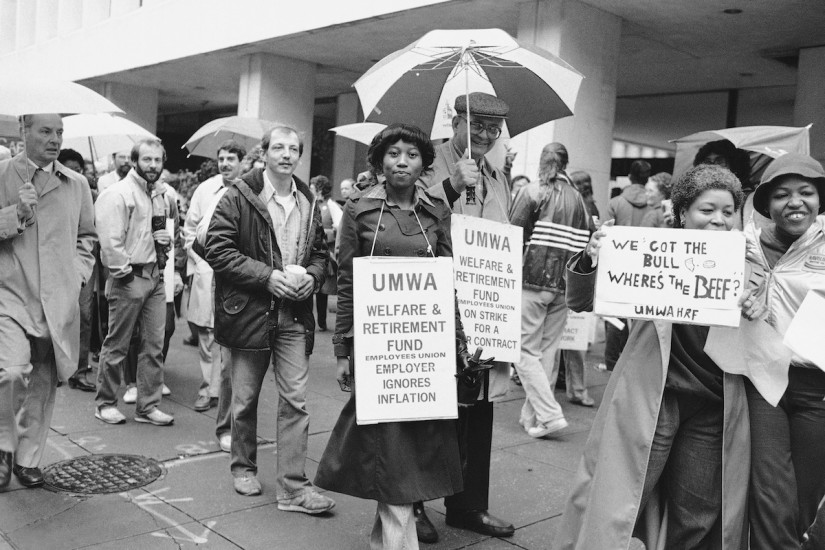 Members of the United Mine Workers of America picket their Washington headquarters in Washington, Oct. 1, 1984.
AP Photo/Frank Russell
…

Besides the theoretical scaffolding linking strike events to cultural structures, A History of America in Ten Strikes revolves around two conceptual axes much debated in the historical literature. First, on the question of how racism and nativism divided and weakened the American working class, Loomis writes that, however he and others on the left might wish otherwise, the “core problem of the American working class [is] its racism.”

Like all subaltern peoples, white workers, Loomis insists, ought to be granted their agency by historians, and in doing so, historians should not gloss over the fact that this agency is at times racist and runs against other egalitarian struggles. Despite capital’s deliberate efforts to split workers by race and ethnicity—for example, by using black strikebreakers—“more often than not,” Loomis writes, “white workers have prioritized their racial identity over their class identity without any help from their bosses.” Even the CIO’s pathbreaking organizing and ideological commitment to black manufacturing workers was, as many scholars have shown, mostly driven by those in leadership and against the frequent opposition of rank-and-file white workers.

Loomis also makes a second argument about the strikes he studies: that state power was crucial in either impeding or facilitating the interests of organized labor and working-class Americans. In weighing whether the militancy of rank-and-file labor activism can be reconciled with the bureaucratization of labor relations by the state, Loomis is, if anything, even blunter than he is regarding the impact of working-class racism.

Time after time, Loomis returns to these two interpretive themes: the debilitating prevalence of racism and nativism among America’s majority-white workforce and the necessity of state power to augment labor’s struggle against capital—because, however inadequate, bureaucratic, and biased it is toward those who own the means of production, only the state has the juridical, administrative, and legislative weight to protect and sustain unions (sometimes simply by not using its power against them).

At times, Loomis links labor’s institutional racism with its need for state support, such as when he observes that the violent opposition of California’s white workers to competition from the Chinese immigrants hired to build the railroads (under perhaps the most brutal exploitation of the Gilded Age) was to result in Congress passing, in 1882, the Chinese Exclusion Act, which barred Chinese laborers from the United States. “A law enshrining racism,” Loomis writes mordantly, “was the American labor movement’s first major legislative victory.”