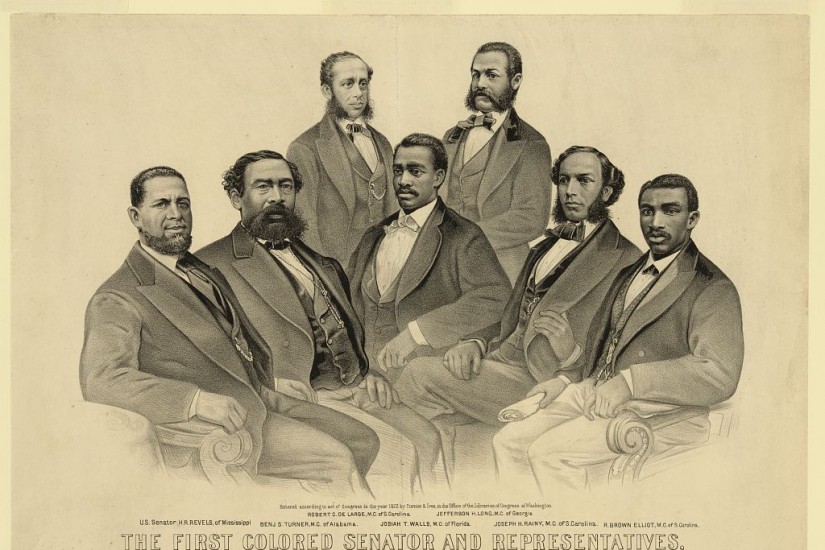 "First Colored Senator and Representatives in the 41st and 42nd Congress of the United States." (1872)
Library of Congress

Not so long ago, the Civil War was taken to be this country’s central moral drama. Now we think that the aftermath—the confrontation not of blue and gray but of white and black, and the reimposition of apartheid through terror—is what has left the deepest mark on American history. Instead of arguing about whether the war could have turned out any other way, we argue about whether the postwar could have turned out any other way. Was there ever a fighting chance for full black citizenship, equality before the law, agrarian reform? Or did the combination of hostility and indifference among white Americans make the disaster inevitable?

Henry Louis Gates, Jr., in his new book, “Stony the Road: Reconstruction, White Supremacy, and the Rise of Jim Crow” (Penguin Press), rightly believes that this argument has special currency in the post-Obama, or mid-Trump, era. He compares the rosy confidence, in 2008, that the essential stain of American racism would fade through the elevation of a black President with the same kind of short-lived hopes found in 1865, when all the suffering of the war seemed sure to end with civil equality. Instead, the appearance of African-American empowerment seemed only to deepen the rage of a white majority. Then it brought forward Klan terrorism and Jim Crow in the South; now it has brought to power the most overtly racist President since Woodrow Wilson, openly catering to a white revanchist base. It’s a depressing prospect, and Gates is properly depressed and depressing about it.

The broad outlines of the Reconstruction story have long been familiar, though the particular interpretive pressures put on particular moments have changed with every era. Toward the end of the war, Washington politicians debated what to do with the millions of newly freed black slaves. Lincoln, after foolishly toying with recolonization schemes, had settled on black suffrage, at least for black soldiers who had fought in the war. (It was a speech of Lincoln’s to this effect that sealed his assassination: John Wilkes Booth, hearing it, said, “That means nigger citizenship. Now, by God, I’ll put him through.”)

After Lincoln’s death, his hapless and ill-chosen Vice-President, Andrew Johnson, did as much as he could to slow the process of black emancipation in the South, while the “radical” core of the abolitionist Republicans in Congress tried to advance it, and, for a while, succeeded. Long dismissed as destructive fanatics, they now seem to be voices of simple human decency.