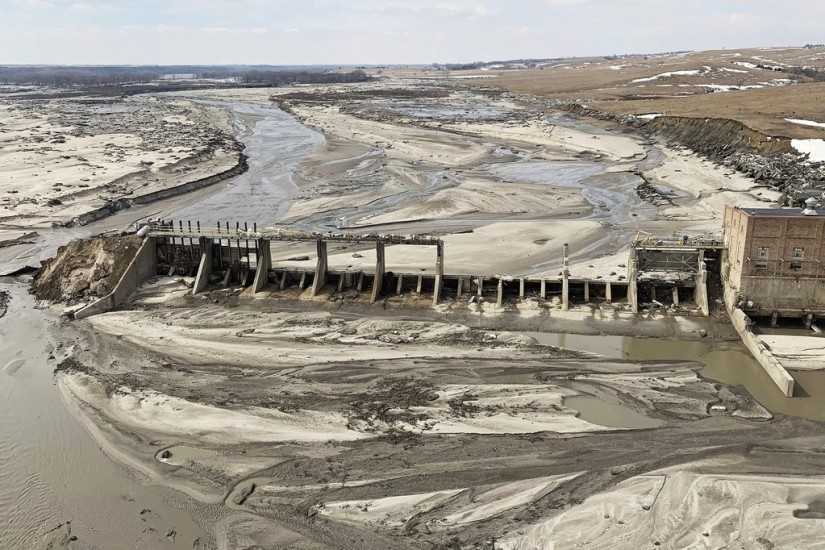 Nebraska's Spencer Dam, one of many structures and areas in the Midwest affected by a recent flood.
Nebraska Governors Office/ZUMA

In March, a combination of melting snow and hard rain on still-frozen ground flooded bottomlands across the northern Great Plains. Along the Missouri River and its tributaries, the icy, muddy, debris-filled water was everywhere, spreading through the wide valleys, from one low ridge to another, for miles. As happens too often with calamities, Indian reservations were hit especially hard. It’s difficult to imagine that such events could become even more routine than they have been in the past, but, as the climate changes, they may.

In South Dakota, the Pine Ridge, Cheyenne River, and Rosebud reservations (all Sioux) declared states of emergency. Thousands of people were cut off from power and clean drinking water and medical services, some even from food. The Red Cross is still working to bring relief; tribal members have carried supplies by boat and on horseback to people who are “watered in.” On Pine Ridge, at least four people have died.

Farther downriver, in Nebraska, the Santee Sioux, Omaha, Winnebago, and Ponca reservations suffered major flooding. The first three of these are on the banks of the Missouri because, in the nineteenth century, the government put them there. The Ponca, however, ended up at the confluence of Nebraska’s Niobrara River and the Missouri because of one man—Standing Bear. With courage and sheer physical persistence, Standing Bear and a few dozen Ponca followers kept returning to that spot, where they had previously lived for generations. For no good reason, the government had ordered them to leave, sent them to Oklahoma, re-sent them there after they turned around and came back, and finally detained them and imprisoned Standing Bear when they tried, yet again, to return. A federal lawsuit that Standing Bear won against the Army, in 1879, resulted in his being freed and the tribe finally being allowed to make its home at the Niobrara-Missouri junction—the goal all along.

The judge’s ruling also established, for the first time in legal history, the precedent that a Native American is a person and has rights. The fact that such a thing needed to be established to begin with shows what Standing Bear was up against. As a result of his victory, he became famous, and he toured widely, giving lectures, aided by his interpreter, Susette La Flesche, a young Omaha woman who married a reporter for the Omaha Daily Herald who wrote the stories that had brought Standing Bear to the attention of the public. Standing Bear had told the judge that he carried with him the bones of his son, who died during the tribe’s Oklahoma exile; he had promised the boy that he would bury him in their Niobrara homeland. After returning, Standing Bear did bury his son near the Niobrara River, and, upon his own death, in 1908, Standing Bear was buried there, too.