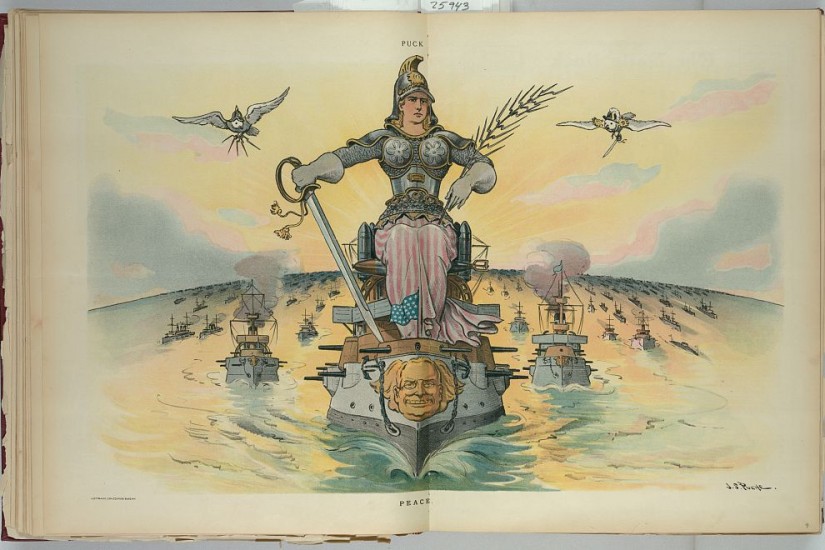 An illustration from 1905 depicting a group of ships with Theodore Roosevelt's face on them and the figure of Peace aboard them sailing across the ocean.
J.S. Pughe/Library of Congress
…

As Grandin demonstrates compellingly, the notion of an infinite frontier has helped Americans evade a material dilemma. This continent’s wealth is finite and, past a certain point, zero-sum; the same holds true for the entire planet. Our uses of that finite wealth are deeply interdependent: Your labor is my rest, and my drudgery makes room for your “doing what you love.” These material constraints pose problems for the American desire to be free and left alone in a community of equals—the formula of the Declaration of Independence, and of most canonical American politics ever since. Yet the more we accept the equality of others, the more constraints we have to take upon ourselves. The point of politics is to engage with these problems, to set the terms of our interdependence as well as our independence, and this requires setting limits.

In short, as the myth of the frontier collapses, American democracy encounters limits, and the road ahead forks. Pointing left are the egalitarians, who take equality seriously, both among citizens and, ideally, among nations, and who therefore speak of the limits we may have to accept on our own appetites and convenience—that is, our freedom, the mythic prize of the frontier. Gesturing right is the Jackson-Trump line of white chauvinists, who aim to resolve the problem of limits by announcing that not everyone can be equal or free. As with the current president, they celebrate walls for keeping out the foreign, the poor, and the dark, reducing the polity to a gated community. Like Jackson’s Democrats, they accept that the relative prosperity and freedom of those inside the country’s borders persist partly because they have their boots on other people’s necks. “How else can it be?” ask these hard-minded realists. “The border is everywhere,” as left activists point out today, has always been the slogan of the Jacksonians, albeit without the note of criticism.

The Jackson-Trump white chauvinists, however, are not the only expansionists in Grandin’s story. The other line of trouble is more tragic and subtle. Grandin devotes evocative pages to Frederick Jackson Turner, the influential progressive historian who argued in the Gilded Age that the frontier had shaped the American character in a unique combination of individuality and egalitarianism, a true democratic temper. Turner was named for his father, Andrew Jackson Turner, who was named for the president, and young Frederick grew up in the Midwest, where he saw some of the last cruel wave of Indian removals. Yet he whitewashed the image of the American frontier, portraying its history as a diorama of ineluctable progress. Although Turner declared the frontier closed at the end of the 19th century, he also described it as having prepared Americans for their new role as a model democratic people for the world.

For Grandin, Turner is an emblem of all the moderate reformers and liberals who like to pretend that the founders’ coalition was never broken, that the original American promise has now been realized in a regime of mildly regulated markets at home and multilateralism abroad.