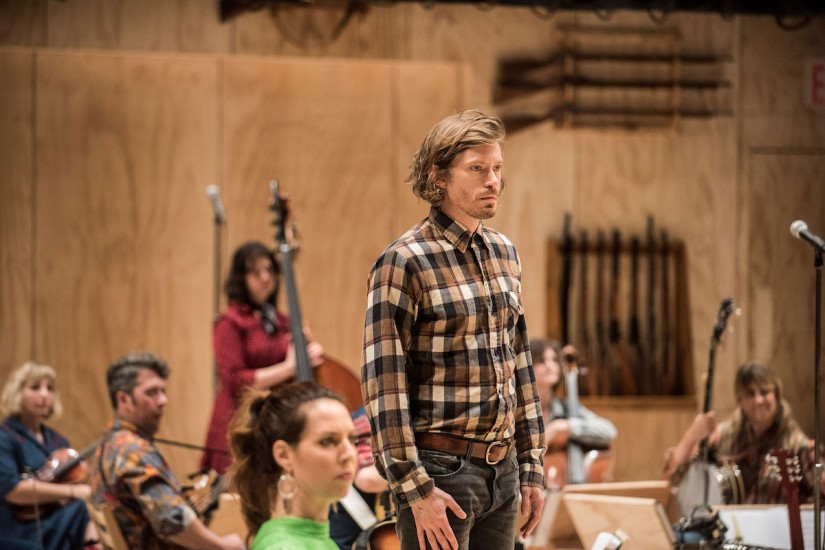 At its birth, the show was to its America what Hamilton has been to ours: both an unexpected record-smashing box-office phenomenon and a reassuring portrait of our past that lifted up theatergoers at a time of great anxiety about the country’s future. Its Broadway opening took place less than 16 months after the attack on Pearl Harbor, when America was shipping its sons off to war and still digging out of the Great Depression. Like Hamilton, too, Oklahoma! was deemed artistically revolutionary for its time. A self-styled “musical drama” rather than a musical comedy, it dispensed with the usual leggy chorus line and leveraged its songs to advance character and plot. Not that there was much plot: The Oklahoma farm girl Laurey can’t decide between the two suitors vying to take her to a box social, Curly and her farm’s hired hand, Jud. What upped the dramatic ante was the creation of a Freudian “dream ballet” by the modern-dance choreographer Agnes de Mille to resolve Laurey’s quandary and the onstage killing of the defeated beau, Jud, when he shows up drunk on her and Curly’s wedding day.

Many generations later, Oklahoma!’s breakthroughs seem academic given the more daring shows that followed in its wake. The librettist and lyricist Hammerstein’s surrogate son, Stephen Sondheim, just turning 13 at the time of Oklahoma!’s opening, would update and expand upon his mentor’s innovations for a modern audience, as have Sondheim’s own musical-theater progeny, including Lin-Manuel Miranda. Over the years, Oklahoma! has settled into the contours of a comfortable antique quilt, albeit one enhanced by glorious songs. The idyllic homogeneous American heartland that it enshrines seems as fanciful as the Magic Kingdom’s Main Street, U.S.A., and is no sooner coming back than the surrey with the fringe on top or, for that matter, the coal industry.

Or such was my lifelong impression of Oklahoma!’s vision of America prior to seeing the new revival in its pre-Broadway airing at St. Ann’s Warehouse in Brooklyn last fall. The production shocked me, moved me, and puzzled me.

This staging culminates in an unexpected and indelible image: When Jud is killed in his climactic confrontation with Curly, his blood splatters on the bride and groom’s immaculate white wedding finery. For an audience watching from shallow bleachers on either side of a vast, brightly lit blond-wood stage evocative of the Oklahoma plains, it’s as if a bomb has gone off in a heretofore pristine paradise.

Unexpectedly, I found myself sympathizing with all three principal characters — most of all Jud, the nominal villain of the piece, who is usually played as a lunkish foil to the endearing Curly. That shift in emotional gravity created the puzzle: This Oklahoma! unfurled a different America than the one I’d always seen in it, starting with my childhood exposure to the lush, wide-screen Hollywood adaptation. The promise of the Great America we associate with the show is still fully present — the democratic America of communal harmony set forth in the saccharine Act Two song espousing how “the farmer and the cowman should be friends.” But for once, equal time is given to the less egalitarian America, in which a community will vilify and cast off an outsider like Jud, a bitter underclass loner with an appetite for drink and pornography.

I left the theater wondering: Had these two contrasting Americas always resided within Oklahoma!, or was this spikier version vandalism by a director imposing his own revisionist spin on a quaint theatrical warhorse?