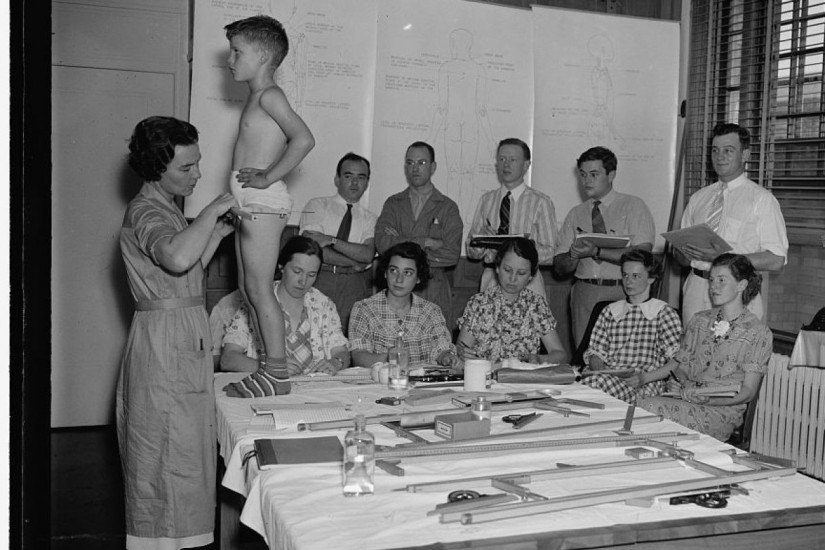 Dr. Eleanor Hunt, associate anthropometrist, Bureau of Home Economics, trains one of the first classes on taking scientific measurements of the human body (1937).
Library of Congress

On some level, most people probably suspect that clothing sizes don’t mean very much, if only from the experience of struggling to fit into garments that should fit but don’t (or vice versa). But put your mind at ease: it is undeniably and objectively true that the sizes of different “sizes” vary dramatically. Measurements for a women’s “size 8” waist can vary by up to five inches depending on manufacturer and brand–according to a 2011 NYT investigation–and the average size of each size has been creeping up over time (presumably so as not to hide how the average American’s size has increased over that same time).

Given an apparently standardized system of sizing, you would think these sizes would be, well, standardized. Why aren’t they?

Before the factory mass production of household commodities, clothing was, for the most part, custom-made. Most people wore handmade garments (or hand-me-downs), but if you could afford it, you hired a tailor or dressmaker to clothe your family’s individual array of bodies. Because each garment was created to fit a specific person’s dimensions, clothing was linked, literally and conceptually, to the specific body of that individual. The kind of standardization required to mass produce and market factory-made clothing did not exist.

Manufacturers first figured out how to mass produce men’s clothing to meet the need for military uniforms, the millions of variously-sized but otherwise identical garments that the deep pockets of the state would gladly pay out for. But ready-to-wear clothing for women and children took longer: it was easy to churn out identical copies of the same garment, but modifying the adult male standard was more difficult. Basing garment dimensions on age (for children) and bust measurement (for women) turned out to be far from ideal. (Though a positive outcome of the quest to standardize clothing sizes was debunking the hypothesis that bust size indicated anything beyond the size of a person’s bust.) In the 1930s, clothing manufacturers estimated that a lack of standard sizing was costing them $10 million per year, and the Mail-Order Association of America–representing retailers like Sears Roebuck–was overwhelmed with returns of poorly-fitting items.

Who could solve this problem? Would it be the producers? Or the consumers?