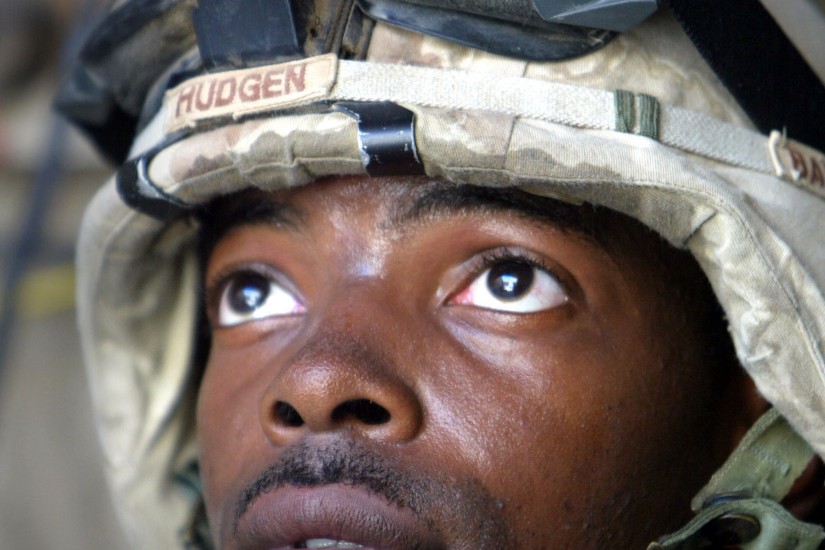 American soldier keeps an eye out for enemy fighters on rooftops during an operation August 15, 2004 in Najaf, Iraq.
Joe Raedle/Getty Images

As the United States approaches a Memorial Day holiday a deeply—and it seems, hopelessly—divided nation, I find myself contemplating the life and tragic death of an American soldier. He did not die in Afghanistan or in Syria. His life was not taken at the hands of ISIS, al-Qaeda, or some other foreign adversary. Instead, he died right here in America. This brave soul died at the hands of a fellow American. His story is one most American historians are familiar with but most Americans choose to forget. Richard Collins III, who had just been commissioned as a U.S. Army lieutenant, died at the hands of a white supremacist. His tragic fate is a reminder of the honorable, and yet also tortured, legacy of the African American soldier in American history.

African American sacrifice in warfare is not far from the heart of American intellectual history. Consider, for instance, that Harold Cruse served in the Army during World War II, where some of his thoughts about African Americans, the Left, and American society were beginning to form into a coherent line of reasoning. The height of James Baldwin’s career and mainstream fame should not be divorced from the

concurrent heightening of the Vietnam War. Intellectuals such as Baldwin, Angela Davis, William Strickland—not to mention Christopher Lasch or Norman Mailer, among many others—all wrote against the backdrop of a war in which thousands of Americans and many thousands more Vietnamese were dying by the year. That Vietnam, like other wars in the twentieth century, sparked debates among African Americans about whether sacrifices were being made in vain, is not a surprise at all. In modern times, Ta-Nehisi Coates has expressed reservations about the use of drones to kill suspected terrorists in the Middle East. There is, however, another element to black soldiering that I wish to also bring attention to as we prepare to contemplate the loss of American life in previous (and current) wars. The links between black soldiers, citizenship, and white backlash are—literally—as old as the American republic itself. To fight for one’s country, so the thinking went, meant that surely the nation would give African Americans equal rights. Time and again, African American veterans and their families were disappointed by the nation’s refusal to properly honor their sacrifice—and after the Civil War and Reconstruction, their constitutional rights.

The most blatant manifestation of this brutal, hypocritical treatment of African American veterans was the murder of returning black veterans in the United States after World War I and World War II. Both post-war periods contained Red Scares that cannot be divorced from what could be called “Black ...