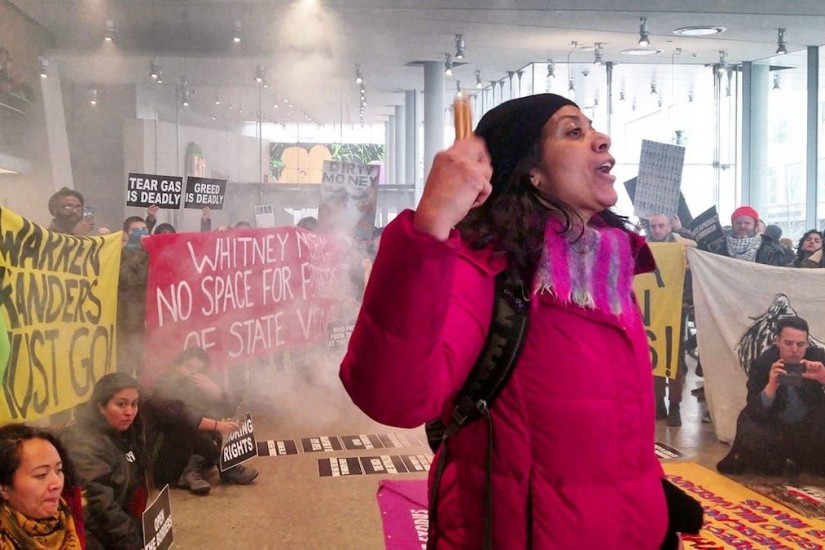 Activists rally in the lobby of the Whitney Museum of American Art, December 9, 2018.
Decolonize This Place

On December 9, 2018, at twelve thirty in the afternoon, a group of about a hundred friends, acquaintances, and strangers began arriving at the corner of Washington and Gansevoort Streets on the far west side of Manhattan, right in front of the Whitney Museum. Many carried signs and banners painted with slogans, which they spread across the sidewalk and weighed down with socks full of spare change: I DIDN’T CROSS THE BORDER, THE BORDER CROSSED ME in green and white, NO DAPL in red block letters against a black background, and FUCK ICE written in a script made of what looked like snakes being torn apart by eagles.

“I want to thank everybody for coming out on this cold-ass day,” said Shellyne Rodriguez, a member of the group Take Back the Bronx. She wore a beanie over her bundle of gray dreadlocks and rubbed her hands together. “Warren B. Kanders is on the board of this museum,” she added, pointing to the shimmering glass and concrete structure behind her. Warren B. Kanders, the vice chairman of the Whitney’s board, is also the CEO of the  “less lethal” arms manufacturer Safariland. Along with making body armor, billy clubs, and the NYPD’s holsters, Kanders’s company is among the largest manufacturers of tear gas in the world, and it was his canisters you likely saw in photographs from 2018 demonstrations at the Mexico–United States border. “We can trace the tear gas canisters launched at the caravan of asylum seekers at the border of the U.S. and Mexico to the Whitney Museum. The time is now to put a stop to that shit. Because what will they do next?”

A man dressed in a heavy parka, military-style green cap, and a keffiyeh went over the plan. His name was Amin Husain, a Palestinian artist, activist, an adjunct at NYU, and cofounder of Decolonize This Place (DTP). Husain cleared his throat and called for a mic check.

“We have posters, and we have banners, and we have signs. Put them on your body, put them in your bags,” he instructed. “We need to be in that museum to hold it accountable. It is also our museum in this city.” Husain paused while the crowd cheered.