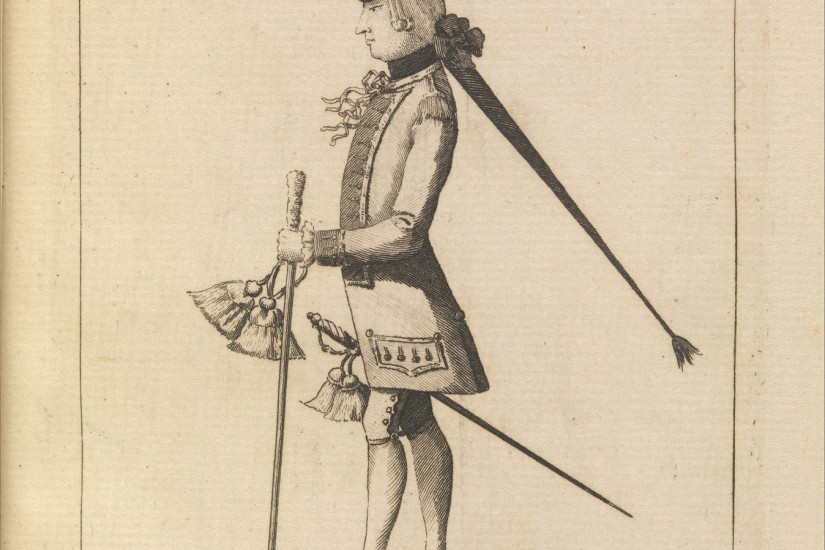 "The Martial Macaroni," a caricature of a fashionable man wearing a cockade. (1771)
Matthew Darly/Museum of Modern Art
…

By way of example, take the cockade, a rosette of ribbons that individuals pinned to hats, bonnets, coats, and dresses. It is perhaps the most illustrative object from the age of revolutions, and historians have done excellent work interpreting the cockade’s significance for specific nations. In these interpretations, a cockade marked a wearer’s political loyalties, and because they were relatively inexpensive, people from all walks of life—elite, middling, poor, and even the enslaved—had an opportunity to wear their politics on their sleeves. The appeal and proliferation of cockades gave actors at the time (and scholars later on) a quick way to locate the outlook of people across the ideological spectrum and to gauge the extent of republican transformation.

But as cockades moved around the Atlantic, they often defied such straightforward readings. Rather, these bits of colored ribbon could be deceptive, and part of the problem stemmed from the fact that for all their power of individual political expression, cockades were also badges of conformity. While this trend held true throughout the Atlantic, it is easiest to see in the French case, because the French government made the wearing of the tricolor cockade mandatory. Throughout the revolution, officials would tinker with this law—for instance, debating whether women should or should not wear cockades—but for much of the 1790s, those living in France and its territories, as well as foreign visitors to these lands, were required by law to wear the tricolor cockade in public.

Inherent in the very absolutism of the French decrees was a tacit recognition that the wearers may not espouse the ideals the cockade was supposed to represent. Evidence suggests that wearing a cockade was, in some cases, a matter more of safety than of political devotion. One American, sailing to France in the mid-1790s, described how his fellow passengers had tricolor cockades in “their pockets ready to put on”—but only once they disembarked in France. For these travelers, the cockade was a precaution, not a political statement. One could argue that French laws were didactic, designed to help the wearer inculcate the republican values the cockade supposedly encapsulated. Victor Hugues, the French republican governor of Guadeloupe, made a similar claim when he requested that his superiors send thousands of cockades for distribution among black soldiers, describing the cockades as “little stimulants that produce great effects.”

But pedagogy frequently fell short, and throughout the period, commentators in Britain, France, the United States, and the Caribbean pointed out the gap between what the cockade was supposed to signify and the behaviors of people who actually wore it.