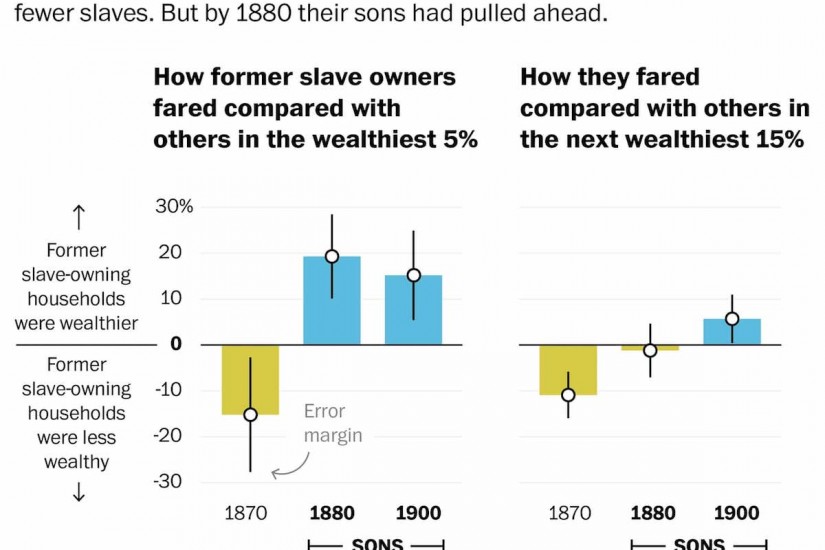 Emancipation should have laid waste to the Southern aristocracy. The economy was built on the forced labor of enslaved Africans, and almost half the Confederacy’s wealth was invested in owning humans. Once people could no longer be treated as chattel, that wealth evaporated.

But less than two decades after the Civil War, Southern slave-owning dynasties were back on top of the economic ladder, according to an ambitious new analysis from Leah Boustan of Princeton University, Katherine Eriksson of the University of California at Davis and Philipp Ager of the University of Southern Denmark.

Their research upends the conventional wisdom that slave owners struggled after they lost access to their wealth. Yes, some fell behind economically in the war’s aftermath. But by 1880, the sons of slave owners were better off than the sons of nearby Southern whites who started with equal wealth but were not as invested in enslaved people.

The sons of formerly enslaved people never caught up, of course. By 1880 more than 90 percent of them were still in the South, and most still worked as farm laborers, tenant farmers or sharecroppers. In the 120 years that followed, they consistently saw lower pay and less upward mobility than similar white men, according to a separate 2017 working paper by economists Marianne Wanamaker of the University of Tennessee and William Collins of Vanderbilt University.

The gulf in economic status between slave and owner is incalculably large, and slave ownership was widespread. More than 1 in 5 white households owned slaves. About 1 in 200 owned 50 or more enslaved people. But there also were income differences among whites in the prewar South. Boustan found that folks at the 90th percentile were about 14 times as wealthy as a typical white household.

The findings by Boustan and her colleagues indicate generational inequality in the United States isn’t just about the money. Even after the enslaved people on whom their wealth was built were freed, Southern elites passed their advantages to their children through personal networks and social capital.