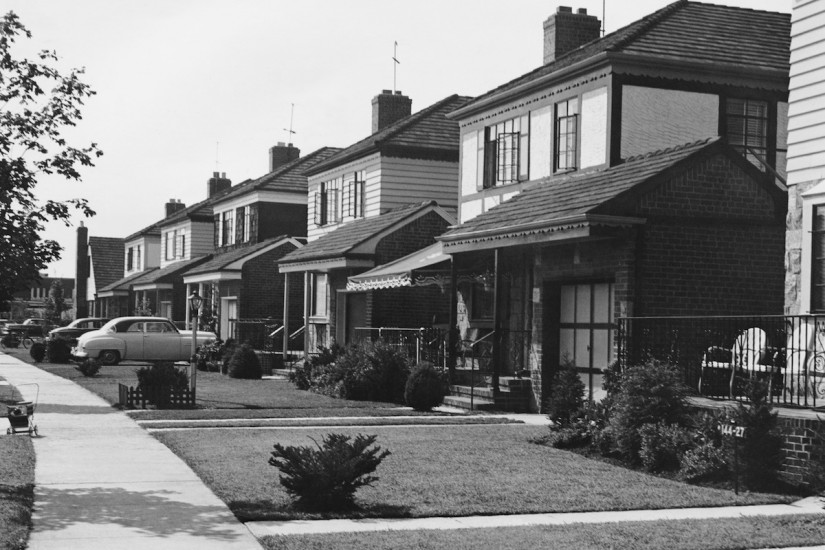 Row of houses in an suburban neighborhood, circa 1950s.
George Marks/Getty Images
…

However, even in their heyday, elite enclaves weren’t the norm on the urban periphery. Agriculture still thrived there, often practiced by foreign-born and non-white farmers, while factories encroached. Shantytowns dotted the city’s rim, as did no-frills developments in which people built houses on raw lots, dug wells, kept chickens and cows, and grew vegetables. In his book Places of Their Own, historian Andrew Wiese recounts the history of Chagrin Falls Park, a self-built black suburb of Cleveland, which grew to have hundreds of residents, four churches, an elementary school, and a community center.

Throughout the 19th century and into the 20th, communes, colonies, and other intentional settlements kept popping up near cities, too. Among many examples from the early and mid-1800s, a celibate, German-speaking religious sect called the Harmonists built a handsome and prosperous town called Economy, in what is now Ambridge, Pennsylvania, in the 1820s. Proximity to the Pittsburgh market was important for their manufactures and the tourist trade (the town had a hotel and even a museum, one of the first in the U.S.).

The Harmonists kept no private property, holding all goods in common, and the town’s architecture reflected this, with infrastructure like shared bread ovens and a community kitchen for preparing holiday feasts. Unrelated adults sometimes lived together, not unlike in a modern group house. Friedrich Engels wrote admiringly of the Harmonist social system—minus the religion. The sect gradually dwindled in number and finally dissolved in 1905.

Ten years later, in 1915, a loose band of anarchists and socialists boarded a train in New York and disembarked in central New Jersey, where they set up a colony and progressive school—and evaded police scrutiny back in the city. When they flew the red flag from the water tower, locals climbed up and tore it down. But they were more or less left alone, and the Stelton colony lasted, through the Great Depression and much political infighting, into the 1950s.