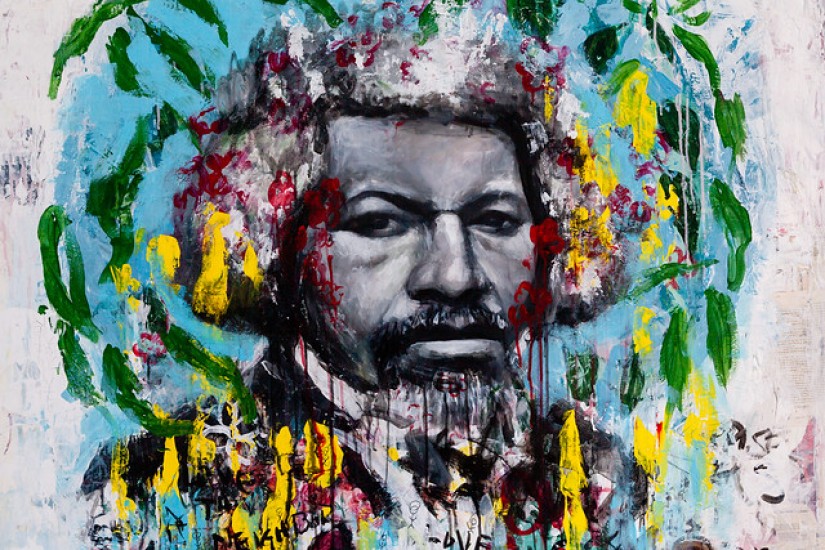 A detail of artist Kenadi Johnson's mixed media portrait of Frederick Douglass, titled "Our Neighborhood at Peace," at the Anacostia Unmapped 2.0 exhibition at the D.C. Commission on the Arts and Humanities gallery in Washington on Sept. 12, 2018.
Rebecca Chillrud/Chesapeake Bay Program
…

Blight’s chief accomplishment may be the way he exposes the radical nature of much of Douglass’s life and work. He makes us feel not only the power of Douglass’s great intellect but also the exhaustion, perils, and sacrifices he made in order to dare to have a huge public life while being black. “My subject then is American slavery,” Douglass once said. Like Karl Marx, who was both capitalism’s most brilliant analyst and its most incisive critic, Douglass was the slavocracy’s steeliest interpreter and most powerful adversary. Douglass saw slavery as an epic evil battening on the nation, and from pulpits and auditoriums across the world he demanded that it be destroyed.

Slavery aims at absolute sway. […] It would drive out the schoolmaster and install the slave driver, burn the schoolhouse and install the whipping post, prohibit the Holy Bible and establish the bloody slave code, dishonor free labor with its hope of reward, and establish slave labor with its dread of the lash.
Brilliantly weaponizing his own being, Douglass lashed out at the slave power: “Show the enemy no quarter. Annihilation, not restriction, this is the motto to be inscribed upon our banners. Off with his head and his heart will cease to beat forever.” Ever the ironist, Douglass claimed that “[o]ppression can make a wise man mad,” and that his “language was less bitter than [his] experience” — which was an excellent way to tell white audiences that whatever he was saying was merely the tip of a ferocious iceberg.

In a May 1857 address concerning the Supreme Court’s Dred Scott decision, Douglass offered up what Blight calls “a political prayer delivered by a prophet summoning God to the aid of history.” Invoking the promise of the laws of nature and the intervention of a just God, he ended his speech with an open call for violence by reciting lines from his own poem “The Tyrant’s Jubilee.”


The fire thus kindled, may be revived again;
The flames are extinguished, but the embers remain;
One terrible blast may produce an ignition,
Which shall wrap the whole South in wild conflagration.
The pathway of tyrants lies over volcanoes;
The very air they breathe is heavy with sorrows;
Agonizing heart-throbs convulse them while sleeping,
And the wind whispers Death as over them sweeping.
…
View on Los Angeles Review of Books
View Connections