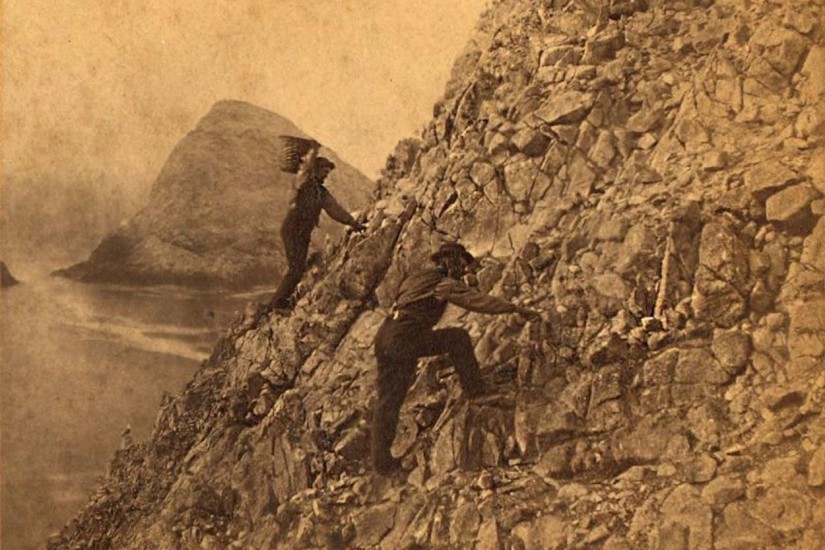 In 1849, or so the story goes, an enterprising pharmacist named ‘Doc’ Robinson hatched a plan to profit off the egg shortage. He and his brother-in-law sailed to the Farallones and raided the nesting grounds. Despite losing half their haul on the rough ride back to San Francisco, the pair pocketed $3,000 from the sale of the remaining eggs. After barely surviving the white-knuckle trip, the men swore to never return. But word of their success traveled fast and almost overnight, the islands were crawling with “eggers.”

The task proved far more dangerous than the standard Easter egg hunt. To reach the rookeries, the eggers had to scramble over guano-slicked rocks, scale sheer cliffs, and fend off clouds of rapacious gulls. Even with the help of handmade crampons, fashioned from rope and rusted nails, accidents and injuries were common. In 1858, the Daily Alta California reported that an egger, “missed his hold while robbing a gull’s nest over the edge of a precipice, and, falling, was dashed to pieces on the rocks below.”

The eggs of the common murre—a sharp-billed seabird with black and white coloring—were the most desirable. They had a thick pear-shaped shell that ranged in color from grey to turquoise, with speckled markings as individual as a fingerprint. Rumor had it that if an egger spent too much time on the Farallones, he’d start seeing his name spelled out on the splattered shells. Most importantly for the entrepreneurs, murre eggs were as edible as chicken eggs, but double the size. Still, they weren’t a perfect replacement. Fried murre eggs had a strange and unappealing appearance. “I must confess the sight…can scarcely be called appetizing,” wrote one visitor, “the whites, though thoroughly fried, still transparent and the yolks of a fiery orange colour, almost red.”

Even worse, stale murre eggs had a strong, fishy aftertaste. In the words of one commentator, “an over ripe murre egg is something never to be forgotten…it requires about three months to get the taste out of the mouth.” As a result, the eggers inaugurated each harvest season by smashing all of the murre eggs on the islands, thereby ensuring the collection of freshly laid eggs. This annual sacrifice notwithstanding, approximately 14 million murre eggs were sent to San Francisco between 1849 and 1896.