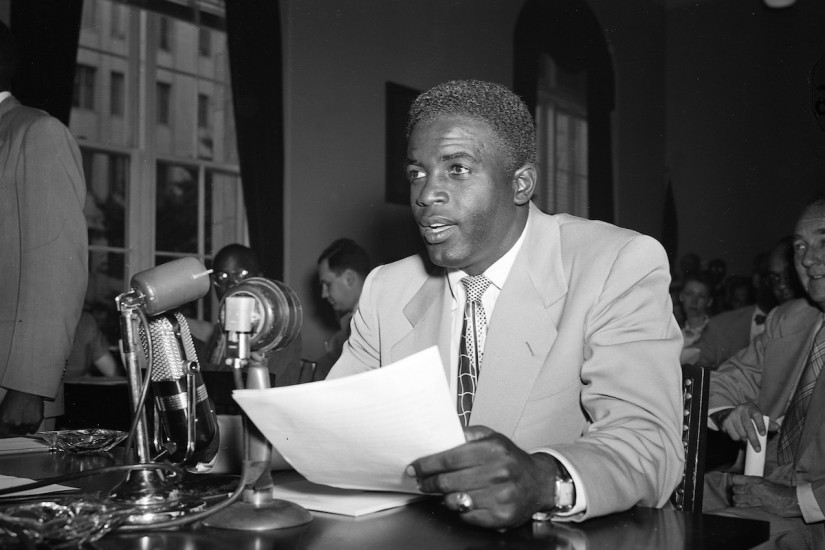 Jackie Robinson speaks before the House Un-American Activities committee, July 18, 1949. Robinson said African Americans would fight for this country "against Russia or any other enemy."
AP Photo/William J. Smith
On the morning of July 18, 1949, Jackie Robinson, dressed sharply in a tan gabardine suit, arrived at a packed room in Washington, D.C., to testify before a congressional committee about the loyalty of black Americans. Flashbulbs popped as Robinson raised his right hand and swore to tell the truth. The subject was stage star Paul Robeson, a prominent Communist sympathizer and one of the most outspoken black men in the country.

Georgia congressman John S. Wood, chairman of the notorious House Un-American Activities Committee (HUAC), had invited the Brooklyn Dodgers hero to testify. HUAC was founded in the late 1930s to investigate subversive activity and political organizations suspected of communism. Segregationists on the committee suspected that civil rights activists were members of the Communist Party. In 1948, however, HUAC’s own investigators had concluded that Communists had made little progress in recruiting African Americans.

But a speech given by Robeson in April 1949 before the Soviet-sponsored World Peace Congress in Paris had renewed the committee’s interest in the subject. Before Robeson even began his extemporaneous talk in Paris, an Associated Press reporter had filed a story quoting the actor as saying, “It is unthinkable that American Negroes would go to war on behalf of those who have oppressed us for generations against the Soviet Union which in one generation has raised our people to the full dignity of mankind.”

Immediately, U.S. politicians and newspaper writers branded Robeson a traitor for suggesting that black Americans would refuse to defend the United States if the Cold War turned hot. Robeson said he had been misquoted and had talked about how many Americans did not want a World War III against the Soviet Union. But his activism on behalf of oppressed workers, his challenges to racism at home and colonialism abroad, as well as his association with leftist organizations and his praise for the Soviet Union already had made him a target of critics in the press and the halls of Congress.

Perhaps this sounds familiar. As black athletes and civil rights advocates, Robeson and Robinson laid the foundation for Colin Kaepernick’s emergence as an activist-athlete. Kaepernick’s political actions can be traced to the radical black tradition, a legacy shaped in part by Robeson, the son of a runaway slave, a former athlete and entertainer turned activist, and an opponent of the intertwining forces of capitalism and racism. Yet Kaepernick’s activism also derives from the example of Robinson, a proponent of the democratic tradition and a vocal critic of lynching, police brutality and the disenfranchisement of black people.

…
View on The Undefeated
View Connections