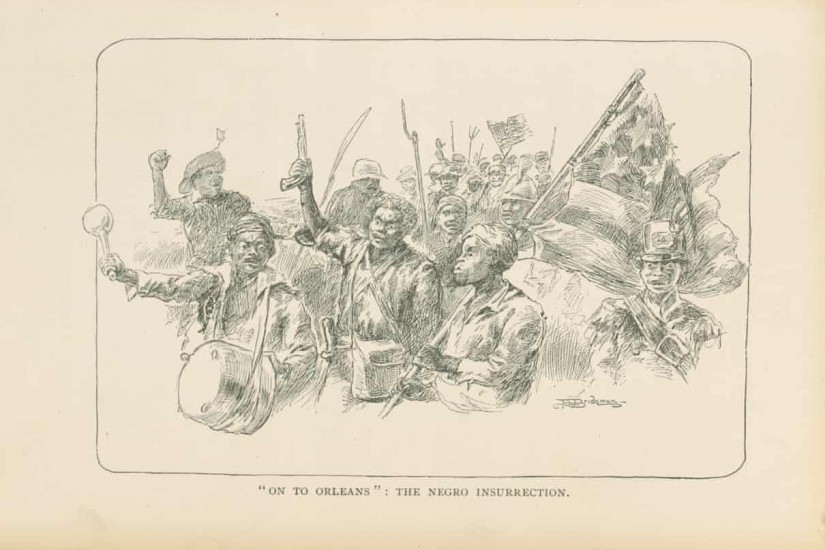 "'On to Orleans': The Negro Insurrection." From Maurice Thompson's "The Story of Louisiana" (1888).
New York Public Library

At night the Pontchartrain Works lights up the horizon. During the day the tall scaffolding and plumes of emissions soar into the sky.

The chemical plant has caused misery here for years. But the land on which it is built holds older and even darker secrets. It is a history, say some residents of Saint John the Baptist parish, which helps explain the pervasive racial and environmental inequality that persists to this day.

Pontchartrain Works was built on a former plantationon the so-called German coast that was settled by Europeans in the 18th century. The fertile land snakes along the Mississippi River between New Orleans and Baton Rouge for about 100 miles. Nestled on a small patch, just outside the town of LaPlace, stood the Belle Pointe plantation, home to the planter André Deslondes and over 150 slaves, which local historians suggest was active from 1792.

Where once stood a West-Indian style plantation house, now stands a plant pumping a ‘likely carcinogen’ into the air. Then, as now, these buildings spelled disaster for black people living in close proximity. The list of serious ailments and deaths from cancer are woven into the story of this town over the last 50 years; just the most recent of deprivations visited on African Americans who have lived and worked on this land for centuries.

In 2015 the Pontchartrain Works facility was found to be the primary cause of some of the most toxic air in America, according to US government findings. In the tract of land just behind the plant, residents in this mostly black and mostly poor town endure a risk of cancer due to air pollution that is the highest in the country and 50 times the national average. For almost five decades the plant had been owned by the chemicals giant DuPont, and has now become the only place in America to emit the chemical chloroprene, which is listed as likely to cause cancer.

The Guardian is running a series of pieces over the course of the next year from Reserve to draw attention to this community – and hundreds like it – who are fighting to win the right to a clean and safe environment for their children. But some injustices run deeper, and for even longer, in this part of America.