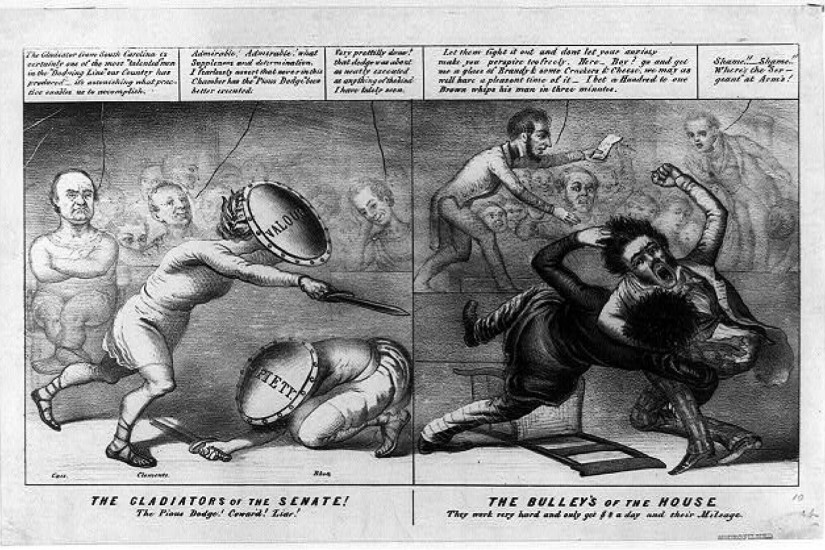 A political cartoon satirizes violence on the floor of the U.S. Congress in the 1850s.
Library of Congress

The alleged body-slamming of a reporter by Montana House candidate Greg Gianforte seems like a reasonable moment to contemplate the very long history of congressmen behaving badly toward one another and members of the media — arming themselves for floor debates, beating the tar out of one another and even imprisoning reporters.

“People often ask me if it’s ever been this bad before,” said Joanne Freeman, a Yale history professor who next year will publish “The Field of Blood,” a history of political violence. “I have to tell them, ‘I’m sorry, it’s actually been worse.’ ”

Freeman recalled the case of Rep. Waddy Thompson (S.C.), “whose physique was alarming,” as one account put it, “and whose spirit was thought to be like that of the fiery Hotspur.” Thompson did not care for Lund Washington Jr. and William W. Curran, the beat reporters from the Congressional Globe. Why? They didn’t give him enough hot type.

“He made a tongue attack upon them in the House, and was prepared to attack them with arms elsewhere,” according to the annual report of the National Shorthand Reporters’ Association. “The reporters prepared themselves for defense.”

At this point, it’s helpful to remember there were no metal detectors back then.

“Mr. Washington, a gentleman of much strength, carried with him a heavy bludgeon into the reporter’s box,” the Shorthand report said. “Mr. Curran was provided with a dagger or knife, sharpened especially for use, in case of necessity.”

There was just so much agitation back then, even without CNN.