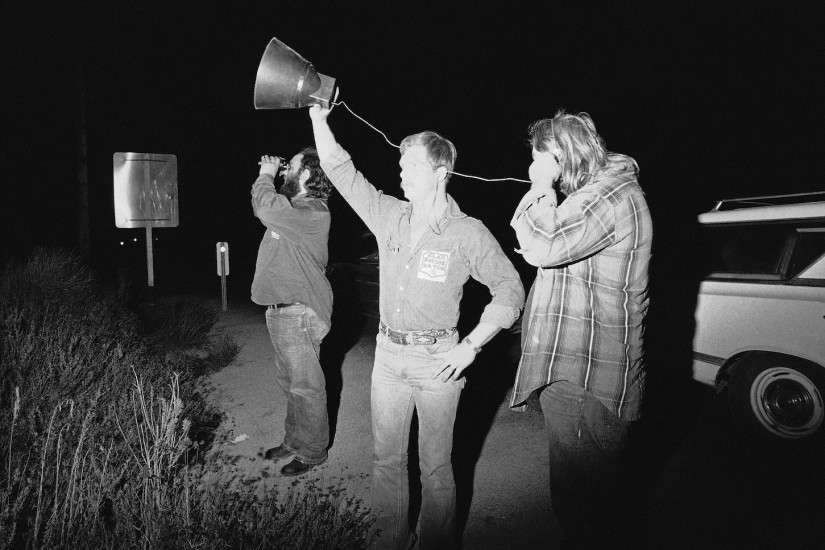 Three members of the Ku Klux Klan use a telescopic listening device and binoculars near the California-Mexico border in their search for undocumented immigrants, Oct. 26, 1977.
Harold Valentine/Associated Press
…

In the summer of 1986, approximately 20 heavily armed men in military fatigues stepped into the darkness of the Arizona desert. It was July Fourth weekend outside the remote border town of Lochiel and the gunmen were on the hunt. They were the Arizona branch of Civilian Materiel Assistance, or CMA, a racist and anti-communist paramilitary outfit that provided mercenary services to the U.S. government and the death squads it backed in Central America. Carrying M-16s and AK-47s, with Israeli night-vision goggles strapped to their heads, the vigilantes soon found what they were looking for: two carloads of Mexican nationals.

J.R. Hagen, the crucifix-wearing Vietnam veteran who led the operation, would later say that the vehicles came to a stop on their own. Other members of his team disagreed, telling reporters that they boobytrapped the road, tearing the tires of one of the vehicles to shreds before opening fire. It was the latest in a series of escalating CMA actions, which had also included clandestine forays into Mexico. The militia members held 16 men, women, and children at gunpoint for an hour and a half before Border Patrol agents arrived to take them away.

At the time, the nation was in one of its periodic bouts of heightened immigration and border security obsession. The Reagan administration’s dirty wars in Nicaragua, Guatemala, and El Salvador were driving hundreds of thousands of refugees north. Arriving at the border, those refugees’ asylum claims were systematically — and illegally — denied by U.S. immigration officials. In response, a network of religious leaders in Tucson, the same town where Hagen and his CMA cronies were based, began smuggling asylum-seekers into the county by the hundreds and moving them to houses of worship. They called it the Sanctuary Movement and they provoked a far more aggressive response from U.S. law enforcement than the gun-toting extremists ever would.

More than 30 years later, the country is again divided on the question of how to respond to those seeking refuge, and amid a new influx of Central American asylum-seekers, border militias have once more entered the national discussion.

But there were border militias long before the CMA or UCP stalked the deserts of the Southwest. In a line that undersells the extraordinary levels of racist violence that have followed these groups, a 2006 Congressional Research Service, or CRS, report noted that “civilian patrols along the international border have existed in a wide variety of forms for at least 150 years.”