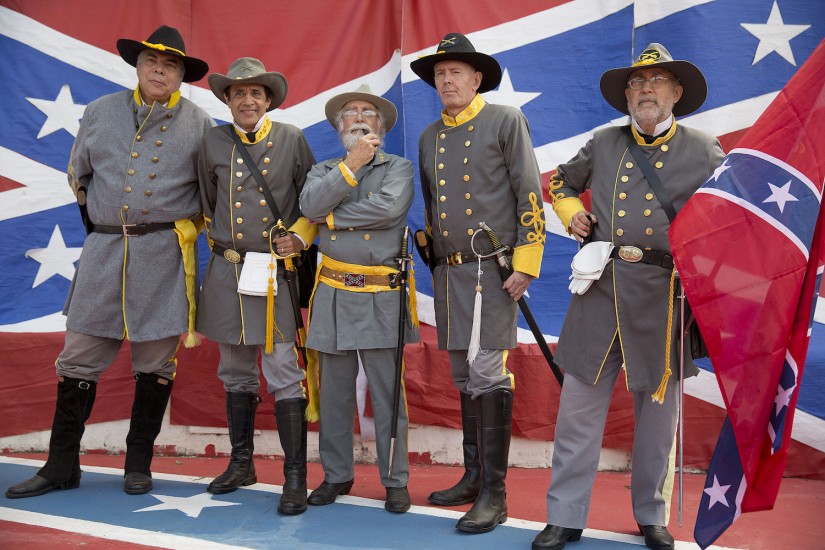 Descendants of American Southerners wearing Confederate-era uniforms pose for pictures at a party to celebrate the 150th anniversary of the end of the American Civil War in Santa Barbara d'Oeste, Brazil, April 26, 2015.
Andre Penner/Associated Press
…

After the Civil War ended in 1865, ending slavery in the United States, some 8,000 to 10,000 Southern soldiers and their families left the vanquished Confederacy and went to Brazil.

There, slavery was still legal. Roughly 40% of the nearly 11 million Africans forcibly brought across the Atlantic between 1517 and 1867 went to work on sugarcane plantations in Brazil. It was the last country in the Western Hemisphere to formally abolish slavery, in 1888 – 23 years after the United States.

Legal slavery may have been a draw for the Confederate soldiers who migrated to Brazil after abolition.

Brazilian political economist Célio Antonio Alcântara Silva analyzed letters sent to Brazilian consulates and vice-consulates in the United States at the end of the Civil War and found that 74% of Southerners inquiring about emigration were slaveowners.

At the time, 25% of white Southern households owned slaves. That means the people interested in moving to Brazil in the 1860s disproportionately represented a relatively small, slaveholding slice of the free Southern population.

The Brazilian historian Luciana da Cruz Brito has also found evidence in the 150-year-old Confederado journals she dug up that slavery attracted white Southerners to Brazil.

In one, an American named Charles Gunter wrote about his desire to purchase enslaved people in Brazil at a lower price than he could in the U.S. Another Confederado, James Gaston, expressed disappointment that he couldn’t bring recently freed African Americans to Brazil.

Rural expertise
Despite these historical records, many descendants of the Confederados dispute that slavery brought their forefathers to Brazil.

As early as the 1860s, Brazil was actively recruiting Southern American plantation owners, part of an immigration policy aimed at attractingEuropeans, European-American and other “white” migrants. According to historians Cyrus and James Dawsey, who were born and raised near Confederado communities in São Paulo, Brazilian Emperor Dom Pedro II also promised cheap land to any American farmer who would come with a plow – a technology Brazil lacked.

Either way, thousands of white southerners made Brazil their new home after the Civil War. In São Paulo state, they established a somewhat closed and culturally homogeneous community that maintained its southern traditions for generations.