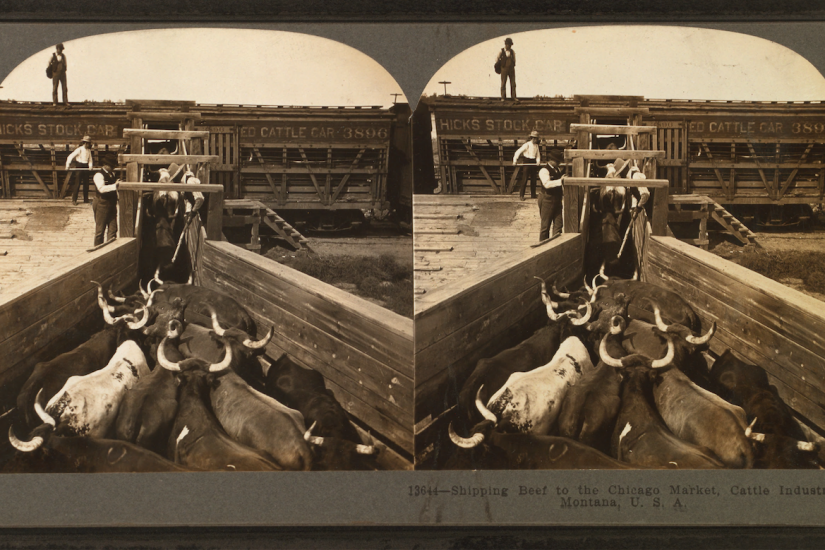 About a year ago, I stopped eating land animals, after reading ethnographer Timothy Pachirat’s account of conditions inside a mass production slaughterhouse operating in the Midwest, where a cow dies every twelve seconds. By contrast, Specht promises a “hoof-to-table” history of how beef changed America, leaving the lives and deaths of the cows themselves at the periphery of his book. He offers a glimpse of them now and then as he follows the commodity chain, including a lively account of the way cattlemen figured out how to make the animals walk in the right direction. But Specht’s focus is unerringly on people. For him, the most egregious aspect of the system is the way that humans in it are treated, and he is most interested in the struggles humans have with one another over how to organize themselves—especially their economic systems.

Specht’s profoundest contention for readers today is that a consumer-oriented activism, playing on concerns for animals (or even the health of our own bodies), is bound to fail. The revolutionary transformation in the American diet occurred because the availability of cheap beef so powerfully impelled it. For this reason, Specht suspects, “Questions about how to reform food production—or even whether it needs reform—must start from questions of political economy.” Whatever the entitlements of nonhuman animals, it is ultimately the interests and needs of humans and the economy they build to serve themselves that will determine what food is eaten and where it comes from.

To that end, Specht believes that the best way to bring about change is to show how closely beef-eating is connected to the flaws of our economic system, with its catastrophic effects on all of nature and its unfairness to human beings. As a historian, Specht says little about what he considers the best set of reforms today. His point, instead, seems to be that there is no saving animals (or the planet) without shaking the foundations of the overall economy. One day, Specht is saying, protecting humans at work could place beef out of reach, and serve other reforms indirectly. In tune with Specht’s argument, groups like the think tank Food First want a “social contract for justice” that would be fair to farmers and workers, and would ensure access to healthy food for all. “Food justice” will require attention to class stratification, gender subordination, and racialized work, if activists are to build a consensus around the harmful effects of beef-eating and their distribution through society.