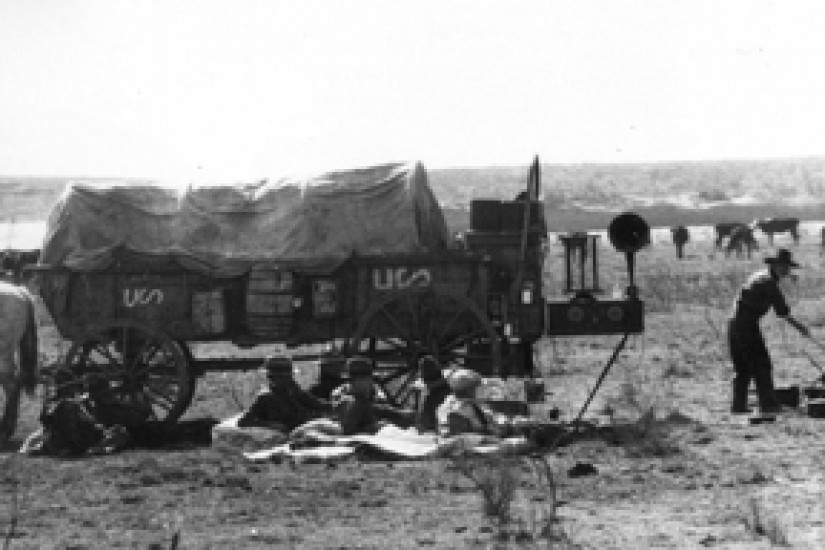 A photo from the early 20th century showing U-Lazy-S Ranch cowboys and a cook gathered around a chuck wagon.
Richard Kilpatrick/Archaeology

During the summer roundup, rancher Bob Macy doesn’t saddle up a horse to move his cattle into the pens next to Macy Ranch headquarters, a collection of a dozen low-slung buildings some 30 miles southeast of Lubbock, Texas. He is much more likely to wrangle his herd from his Bell JetRanger helicopter, which he pilots with the same calm assuredness of a cowboy who has spent decades in the saddle. A descendant of the legendary cattleman John Slaughter, Macy runs one of four ranches that comprise the former U-Lazy-S Ranch, which covered 83,000 acres straddling the edge of the Llano Estacado, or “staked plains,” one of the largest mesas in North America. Before Slaughter bought the spread in 1902, it was known as the Square and Compass Ranch, and was one of the earliest cattle ranches in the southern High Plains. Today the region is dominated by rows of gleaming 30-story-tall wind turbines, massive green cotton fields, and continuously pumping oil rigs.

The view from Macy’s helicopter as he takes off from ranch headquarters features the far-off turbines and vast modern farms of the Texas Panhandle. As he pilots his craft over the 300-foot-tall cliffs known as the Caprock Escarpment that divide the level plains of the Llano Estacado from the rugged rolling plains below, he begins to point out sections of the ranch that formed the backdrop to events that played out long before the area became a reliable engine of the modern Texas economy. As he speeds the helicopter along the perimeter of the former U-Lazy-S Ranch, he explains that this rugged landscape conceals a network of sites and artifacts left behind by Native Americans, buffalo hunters, and early cowboys, whose stories are the raw material that forged the most iconic imagery of the American West. With Macy’s support, a team of archaeologists from the Lubbock Lake Landmark, a unit of the Museum of Texas Tech University, is now surveying and unearthing the remains these people left behind. “What we have here is a unique opportunity to explore the history of a single cattle ranch,” says archaeologist Eileen Johnson, director of the Lubbock Lake Landmark. “But it also helps us understand the larger narrative of how people lived here in the southern High Plains.”