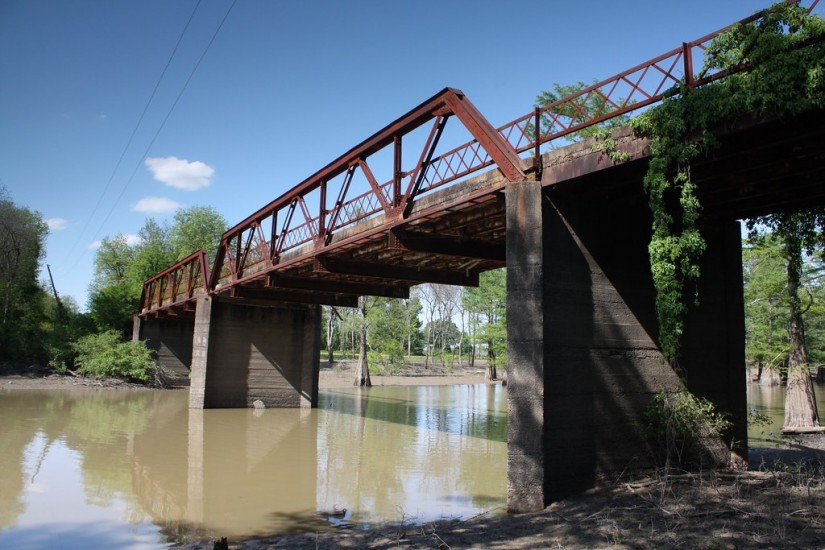 Some say Till’s body was dumped from the Old Black Bayou Bridge in Glendora, Mississippi. Others dispute this detail.
flickr.com/cmh2315fl
…

Glendora is saturated with memorials. The tiny town of five streets boasts 18 signs dedicated to the memory of Emmett Till’s 1955 murder. In addition, Glendora is also home to the Emmett Till Historic Intrepid Center, a Till-themed park and the Black Bayou Bridge – a long-decommissioned bridge recently explored in a New York Times article as the site from which Till’s body may have been dropped in the water.

Glendora is also marked by breathtaking poverty. In an application for federal assistance, town officials noted that the Glendora median household income is 70% below the state average, 68% of families live below the poverty line, and just 18% of the adults have earned a high school education. According to numbers published by Glendora Mayor Johnny B. Thomas in 2017, 86% of children in the village live below the poverty line. Partners in Development, a nonprofit committed to helping the poorest of the poor, has chosen to focus on Haiti, Guatemala and Glendora, Mississippi.

The Glendora version of Till’s story is unique on two counts.

First, while virtually every 20th-century history of Till’s murder suggests that the murderers dropped the body in the Tallahatchie River, the commemorative work in Glendora suggests that Till was dropped into a tributary known as the Black Bayou from a bridge on the south side of Glendora. According to this account, the bayou then carried Till’s body for three miles to the Tallahatchie River, where it was recovered.

Second, while no historian has been able to say with certainty where the murderers obtained the fan they used to weigh down Till’s corpse, the Glendora museum claims that the fan was stolen from the Glendora Cotton Gin, presumably by Elmer Kimbell, a gin employee and the next-door neighbor of confessed murderer J. W. Milam.

While these variations on the finer points of Till’s story may seem like minutiae, to Glendora residents they are matters so weighty that it sometimes seems as if the very future of the town hinges on where Till’s body was dropped in the water and what fan weighed it down.

In 2010, the Mississippi Development Authority sent a team of economic development experts to Glendora. Their charge was to devise a plan to rescue the town from poverty – a tall order.