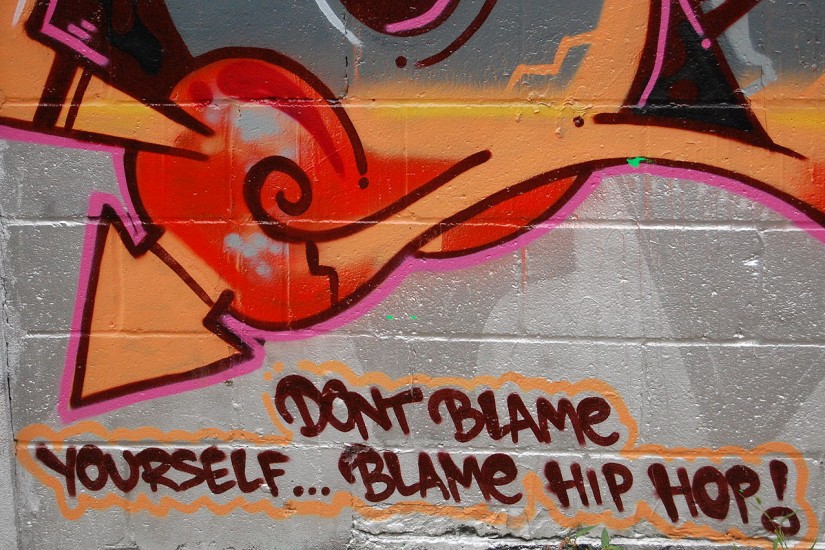 Vibrant graffiti found on the side of a wall highlights the prominence of hip-hop in contemporary culture.
Angie Schwendemann/Wikimedia Commons
…

Sounds, like places, are memory receptacles, manifesting both material and sonic arrangements in space. Accordingly, places and sounds are linked in this way, and together become parts of tangled and chaotic, yet structured and mappable, territories of meaning. Local hip-hop communities seem to find their individuality in the sonic and lyrical expressions of their physical and cultural landscapes, as well as in the accumulation of the musical archives of the place, forming unique yet simultaneously collaborative, allusive, repetitive, and thus overlapping sonic landscapes—otherwise known as soundscapes. And as the reverberations of rap music continue to expand, individuals become simultaneously placed and mobile beings—as consumers of culture and music and as subjects of increasingly mediated realities.

Today, hip-hop’s internal creative force is only growing stronger and more chaotic, constantly turning over and taking on new forms, spatially, temporally, and sonically. The global spread of hip-hop culture has led to a new geography of linked ecosystems, powered by proliferating media and communication technologies. As a result, hip-hop has become an unbounded layering of sounds, people, and practices, which departs from its initial existence as an assortment of remotely connected ecosystems anchored in geographically distant cities.

New centers of production seem to emerge when fans and consumers engage in hip-hop’s diaspora by acting on their desires to create new branches of an already-established hip-hop tradition that reflect their own experiences of place and locality. You can hear it: emerging local scenes tend to transition from an initial adoption of previous styles and musical forms to a subsequent adaptation, where the cultural producers of a specific locale begin moving toward a more distinct individuality. Hip-hop, according to Jeff Chang, "is where flux, identity, revolution, and the masses mix, and keep on expanding."