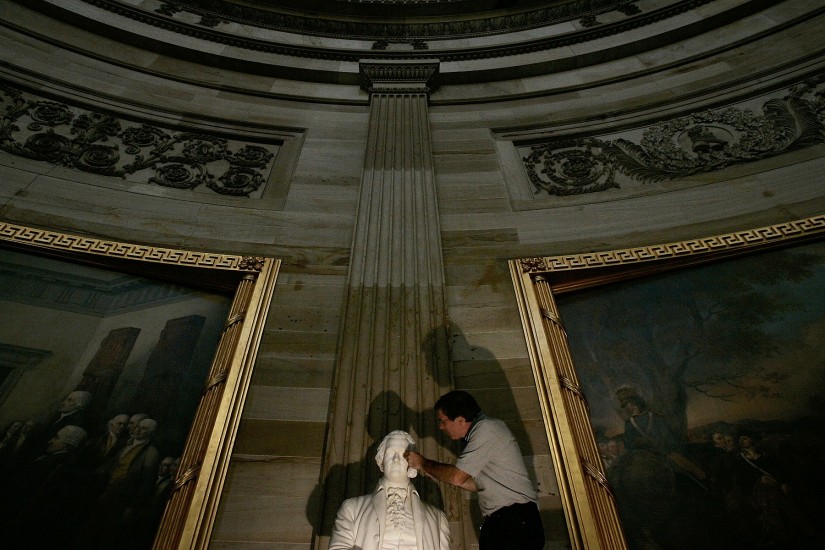 Conservator Cameron Wilson of New York City cleans up the sculpture of founding father and the first Secretary of the Treasury Alexander Hamilton inside the rotunda of the U.S. Capitol October 19, 2005 in Washington, DC.
Alex Wong/Getty Images

Even in an age of declining civic education, a basic understanding of the founding generation thankfully remains part of America’s secular catechism. Over the past decade, the Founding Fathers have even enjoyed a renaissance. Creative storytellers like David McCullough and Lin-Manuel Miranda breathed life into stories we thought we knew. The Obama years birthed a tea party movement that had at its center a restoration of constitutional principles. And now, in the age of Trump, progressives have discovered a strange new respect for the importance of the Constitution’s checks and balances and restraints against majoritarian impulses.

But even with their newfound fashionability, the founders remain widely misunderstood. Names like Washington, Adams, Jefferson, Madison, Franklin, and Hamilton still carry weight, but the ideas they espoused get discarded. Other key figures—individuals whose words and ideas contributed much to the founding—are either relegated to the footnotes or missing altogether from our nation’s popular history.

The familiar narrative many of us were taught as children about our founding—that great men came together to forge a Constitution that set America on its present course—isn’t exactly true. Much of it has been deliberately crafted as a means of justifying our modern political whims. History is, by its nature, about the battle of ideas. The problem comes when we look to history not to understand it or draw inspiration, but to seek out confirmation for our pre-existing beliefs.