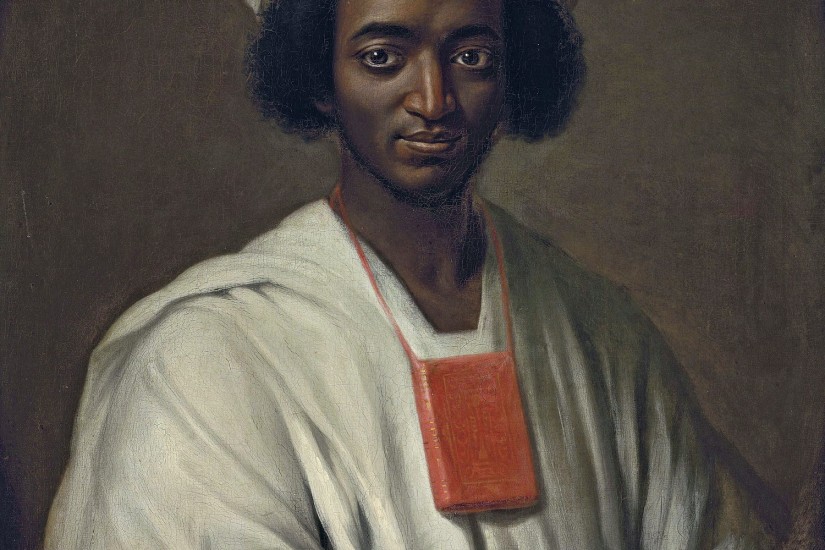 Ayuba Suleiman Diallo, a West African Muslim enslaved in Maryland, is depicted in this portrait with a Qu'ran around his neck (ca. 1733).
Wikimedia Commons
…

By 1503, we know that Muslims themselves, from West Africa, were in the New World. In that year, Hispaniola’s royal governor wrote to Isabella requesting that she curtail their importation. They were, he wrote, ‘a source of scandal to the Indians’. They had, he wrote, repeatedly ‘fled their owners’. On Christmas morning 1522, in the New World’s first slave rebellion, 20 Hispaniola sugarmill slaves rose and began slaughtering Spaniards. The rebels, the governor noted, were mostly Wolof, a Senegambian people, who have been Muslim since the 11th century. Muslims were more likely than other enslaved Africans to be literate: an ability rarely looked upon with favour by plantation-owners. In the five decades following the 1522 slave rebellion on Hispaniola, Spain issued five decrees prohibiting the importation of Muslim slaves.

The popular misunderstanding, even among educated people, that Islam and Muslims are recent additions to America tells us important things about how American history has been written. In particular, it reveals how historians have justified and celebrated the emergence of the modern nation-state. One way to valorise the United States of America has been to minimise the heterogeneity and scale – the cosmopolitanism, diversity and mutual co-existence of peoples – in America during the first 300 years of European presence.

The writing of American history has also been dominated by Puritan institutions. It might no longer be quite true, as the historian (and Southerner) U B Phillips complained more than 100 years ago, that Boston had written the history of the US, and largely written it wrong. But when it comes to the history of religion in America, the consequences of the domination of the leading Puritan institutions in Boston (Harvard University) and New Haven (Yale University) remain formidable. This ‘Puritan effect’ on seeing and understanding religion in early America (and the origins of the US) brings real distortion: as though we were to turn the political history of 20th-century Europe over to the Trotskyites.

Think of history as the depth and breadth of human experience, as what actually happened. History makes the world, or a place and people, what it is, or what they are. In contrast, think of the past as those bits and pieces of history that a society selects in order to sanction itself, to affirm its forms of government, its institutions and dominant morals.

The forgetting of early America’s Muslims is, then, more than an arcane concern. The consequences bear directly on the matter of political belonging today.