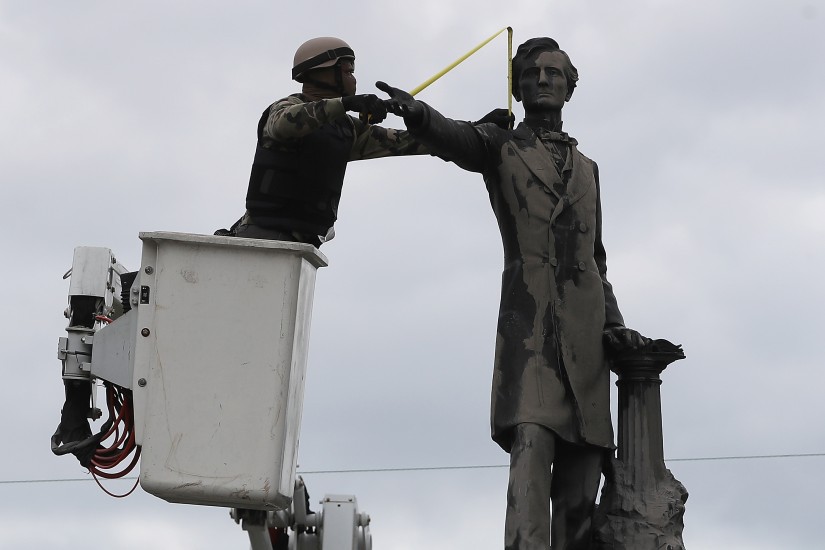 Mayor Mitch Landrieu of New Orleans has revived the genre of Memorial Day orations. In his widely read and re-played speech of May 19, 2017, defending his leadership of the removal of four prominent public monuments, one to Reconstruction era white supremacist violence, and the other three to Confederate leaders, Robert E. Lee, Jefferson Davis, and P. G. T. Beauregard, Landrieu eloquently tried to pull the Confederacy once and for all – at least in New Orleans – down from its pedestals. He beautifully labeled his city “a bubbling cauldron of many cultures,” expressing its ancient roots in many Native American peoples; in at least two European empires; in African, Irish, Italian, French, and many other ethnic lineages; and of course in cuisine, jazz and “second lines.” New Orleans, he said, is a city made by all the nations of the world, but one great “gumbo” made from many. The speech was as deeply patriotic as it was also deeply political—“e pluribus unum” carries a weight right now in Trump’s America that makes most politicians shy from such fulsome embraces of pluralism and brutally honest historical consciousness. Indeed, any historical consciousness, save for toxic forms of nostalgia, is out of style among Trump’s supporters as well as his cowed, silent enablers in the Republican Party.

Delivered a week and a half before Memorial Day, but during the stunning dismantling of the huge Lee monument in the heart of the city, Landrieu’s speech should be read against the grain of the 152 years of Decoration Day rhetoric. Wittingly or not, the mayor gave the whole country a serious lesson in how Americans should contemplate their war dead, indeed their broader past, in this divided and quarrelsome nation. He suggested they learn some good history first, face its most troubling parts however painful, and separate “remembrance of history and reverence for it.” It is an extraordinary act for a Southern white politician to ask his fellow citizens to seriously separate heritage from history, to look down the dark tunnel of slavery and New Orleans’s infamous “slave markets,” and the “misery, rape, and torture” that followed for so many unnamed individual Africans, Creoles, and African Americans sold as property into the Mississippi River valley. Landrieu argued that ignorance or denial of this past for so long had been collective “historical malfeasance, a lie by omission.” He called New Orleanians, and thereby all Americans, to an alternative kind of remembrance for this Memorial Day. He asked his auditors to learn a more complex past and to grow some historical and moral backbone as they think about memorialization.