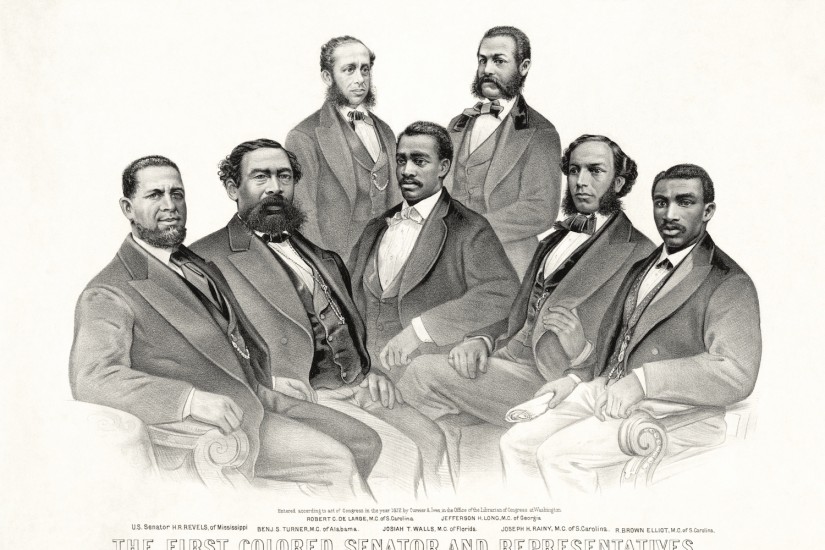 Illustration, "First Colored Senator and Representatives in the 41st and 42nd Congress of the United States" (1872).
Wikimedia Commons

A few months ago, at another blog, my friend Eran Zelnik posed a problem related to students’ “emotional well being” in history courses. At the end of a semester teaching early U.S. history, he wrote,


"there was something hanging in the air after class that still felt too depressing for a group of 18 year-old freshmen. It was, oddly enough, when I went back to my own work on my book, that I finally realized what was troubling me. It was the narrative trajectories I keep employing [as a lecturer]. Virtually all of them start on a positive note and end on a somber one.

From lectures about New England and Virginia during the late seventeenth century, through lectures on the American Revolution, to lectures on Redemption and Jim Crow, they all started with opportunities lost and ended with the retrenchment of power structures of one variety or another to the detriment of the majority."


Since—as I keep saying—narrative is fundamental to history at all levels, I think Eran is right to raise this as an issue.
The problem crystallized in my mind one day a few years ago. In the modern U.S. survey, I was covering 1950s consumer society and mass culture. My young students seemed entranced by the cultural optimism I was describing. I commented on their reactions, and some of them explained that they were fascinated by—and perhaps needed (I’m pretty sure that was their word)—a vision of American optimism about the future. For they had come of age in a pessimistic time. And, I suspect, they had been paying attention to the narrative trajectory of some of my other lectures.

(Don’t worry. I did plenty of things to complicate their picture of 1950s optimism.)

This matters for reasons beyond emotional health. First, historians’ habits of pessimism tend to produce cynicism about public affairs. Second, if left unchecked, our pessimism actually does an injustice to the vulnerable and marginalized people of the past—people who built lives of meaning for themselves amid the large-scale public failures we describe.

In fact, this can result in major analytic failures on the part of historical educators. To take one example: I’ve had college students express surprise after learning that a substantial population of free African Americans (amounting to nearly half a million people by 1860) existed from the colonial era onward. It was a concept that had never occurred to these students—ever. Our dominant narratives about slavery, in structure if not in substance, tend to submerge that population’s history completely, at least in high school.