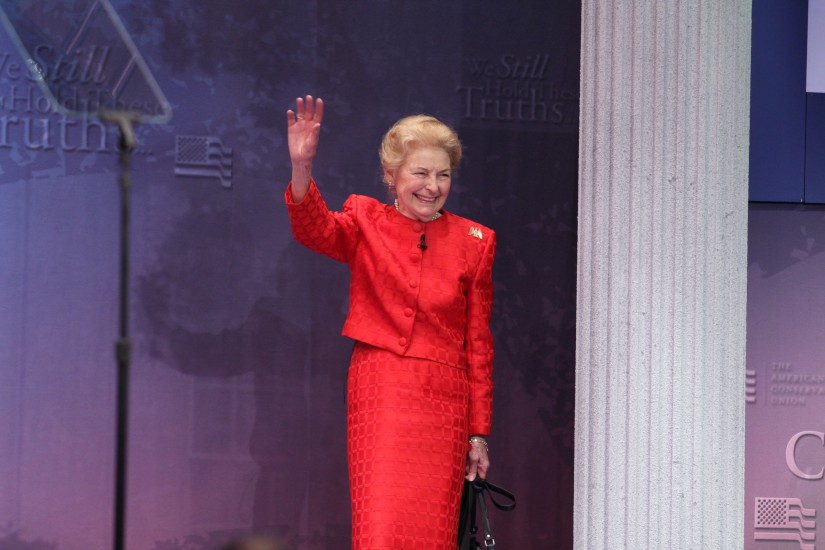 Phyllis Schlafly speaking on a panel at the Conservative Political Action Conference in 2012.
Mary Taylor/Wikimedia

Not even death could stop Phyllis Schlafly. Her final broadside, The Conservative Case for Trump, was released the day after she died at the age of 92 last September. It was a fitting bookend to her first, A Choice Not an Echo, her self-published endorsement of Barry Goldwater for president in 1964. Unlike many other Christian conservatives who backed Texas Senator Ted Cruz in the GOP’s 2016 primaries, Schlafly supported Trump from the outset. Early in the year, she gave an hour-long interview to Breitbart News, making the case that Trump represented the only chance to overturn the “kingmakers” (her word for the Republican establishment). Like Trump, Schlafly’s politics were often focused on a muscular concept of national security. She wanted to see a “fence” protecting the country’s southern border, and she argued that Democrats were recruiting “illegals” in order to bolster their electoral chances. Despite his three marriages, she saw Trump as an “old-fashioned” man whose priorities were hard work and family. After Schlafly died, Trump returned the love. He gave a eulogy at her funeral in the Cathedral Basilica of St. Louis, raising a finger to deliver a promise: “We will never, ever let you down.”

Schlafly emerged on the national scene in the early 1970s, when she led the campaign against the Equal Rights Amendment through her Eagle Forum. Although she’d been well-known in conservative circles since the 1950s, antifeminism brought Schlafly new levels of recognition. In a few short years, she became a household name for a resurgent cultural conservatism, one that ultimately defeated the ERA and helped to elect Ronald Reagan president. Her rise during this period is the subject of Divided We Stand by the political historian Marjorie J. Spruill, a fascinating new account of the “two women’s movements” of the 1970s.