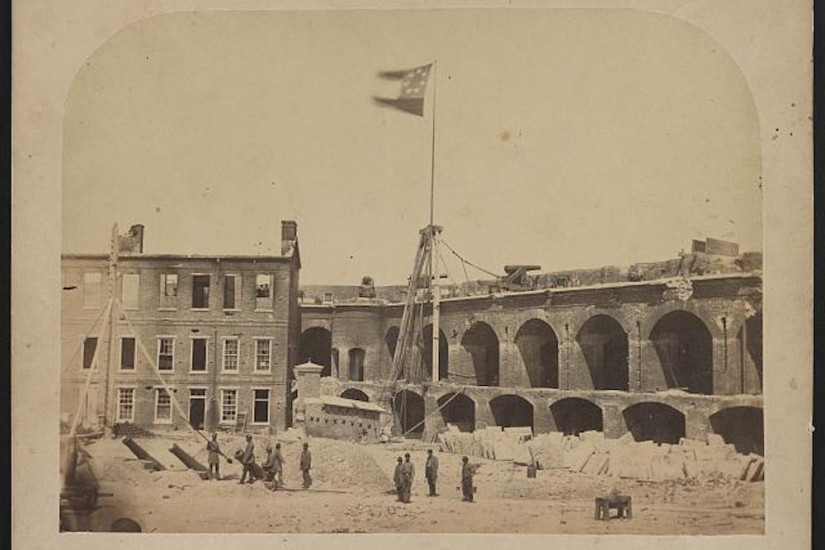 The flag of the Confederate States flying over Fort Sumter after the evacuation of Robert Anderson's United States forces (1861).
Library of Congress
…

Between Fort Sumter and Appomattox Courthouse, both Union and Confederate forces surrendered on dozens of occasions, including some of the decisive battles of the war: Fort Donelson, Harpers Ferry and Vicksburg. In the largest of these surrenders, soldiers numbering in the thousands laid down their arms. In nearly every Civil War battle, soldiers – individually and in small groups – found themselves in a position where choosing not to fight appeared to be their only option, and threw up their arms in surrender.

One of the reasons why surrender proved so ubiquitous was that both Union and Confederate officers had a clear, shared understanding of when one could do it honourably, a rubric demonstrated during Robert Anderson’s surrender at Fort Sumter. When under fire, one could surrender honourably once it became evident that continuing to fight would prove fruitless.

This remained the standard throughout the war, even to the very end. For instance, in May 1865 – more than a month after Lee’s surrender at Appomattox, after the surrender of other Confederate armies under generals Joseph Johnston, Richard Taylor and Jeff Thompson, after the capture of Confederate President Jefferson Davis – the Union army sent a courier to General Edmund Kirby Smith asking if he’d like to surrender the last major Confederate force in the field. The Commander of Department of the Trans-Mississippi, Kirby Smith had been isolated from the rest of the Confederacy since the fall of Vicksburg two years earlier. Yet, he said that he could not surrender, writing in a lengthy reply that ‘an officer can honorably surrender his command when he has resisted to the utmost of his power, and no hopes rest upon his further efforts’. Kirby Smith was not any under illusion that the Confederacy would rise again or that he could defend himself against a Union invasion of the Trans-Mississippi, but concluded that he could not surrender until the circumstances forced his hand.