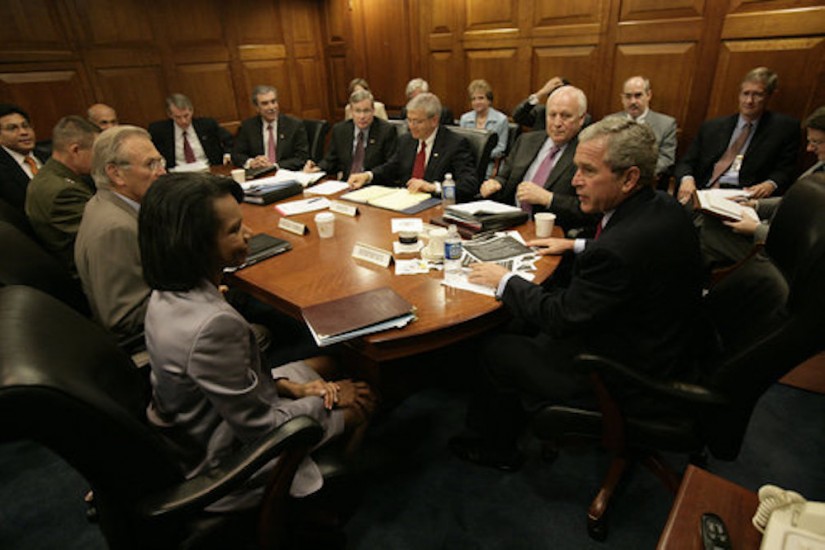 In 1947, two years after the United States emerged victorious in World War II, the 80th U.S. Congress passed the National Security Act, which created the Department of Defense (originally titled the National Military Establishment), Central Intelligence Agency, and National Security Council. Though the nation had demobilized after the war, anxieties about communism quickly permeated the American foreign policy establishment. To combat the Soviet Union—and to manage the nation’s increasingly global interests—decision-makers established, for the first time in American history, a peacetime “national security state” able to deploy thousands of weapons and millions of troops all over the world.

Compared to its better-known counterparts, the National Security Council remains something of a mystery. Headquartered in the Eisenhower Executive Office Building, next to the White House and a block away from the Council on Foreign Relations, the NSC bridges the gap between the intellectuals and decision-makers of the foreign policy establishment. The council, in short, is a core institution of the “military-intellectual complex,” the network of organizations that since the late-1940s have provided government officials with the ideas they rely on to make foreign policy. If the military-industrial complex builds the weapons of American empire, the military-intellectual complex develops the concepts that determine where such weapons are actually used.

In his breezy White House Warriors, John Gans offers an enlightening summary of the NSC’s history from the Truman through the Obama Administrations. This is a story of some of the best-known—and most reckless—players in the history of U.S. foreign policy, including Henry Kissinger, Zbigniew Brzezinski and Oliver North; of wars plotted and planned behind closed doors; of power struggles between advisors and presidents; of many bad suggestions and very few good ones. Ultimately, it is a story that underlines the problems with centralizing power in a White House controlled by an unaccountable cohort of “the best and the brightest” whose records suggest they are anything but.

Gans is a man of the establishment—he worked at the Pentagon and Treasury Department and served as a speechwriter for Ash Carter, Chuck Hagel, and Jack Lew. Yet even he is anxious about the NSC’s unregulated power. Of all the institutions of U.S. foreign policymaking, the NSC is among the most undemocratic.