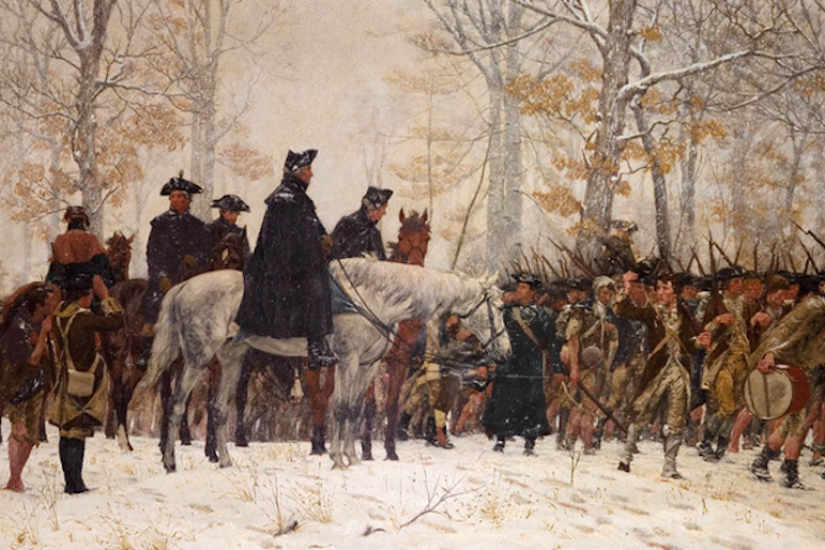 The March to Valley Forge, a painting by William Trego depicting George Washington leading the Continental Army to Valley Forge in 1777 (c. 1883)
Museum of the American Revolution
…

On an absolute scale, the American Revolution was a relatively modest affair. However, judged in light of the tiny American economy of 1776–83, it was an enormous undertaking. As a percentage of GDP, the Revolutionary War cost the United States about as much as World War I did (and remember that, before the absolutely massive conflict of World War II, World War I was known as “the Great War”).

For such large-scale conflicts, financing usually comes through issuing public debt. It is just too much to pay via taxation on the citizenry. And indeed, if you look through the government propaganda of World Wars I and II, you will see a relentless emphasis on purchasing war bonds. The problem for America in the 1770s and 1780s was that debt financing was largely unavailable. Domestic wealth was tied up in land, which cannot be quickly turned into cash. And while foreign governments did loan some money to us, none of them lent enough to finance the entire conflict.

That meant that the bulk of public financing had to come through inflation — which at the time meant an increase in paper money not backed by specie (or coins minted from precious metals). The government would print money to pay for goods and services necessary for the war, which would increase the price of those goods and services, inducing the government to print more, and so on. Inflation is essentially a tax on holding cash, and it was in this way that most of the Revolutionary War was paid for.

The Americans suffered two closely related problems with this strategy of finance. A long-run program of inflation sapped public confidence in the currency, which led to the runaway inflation that was evident by 1780, so the currency was not worth anything at all. As a result, the government had to provision the soldiers through impressment of private goods. Meanwhile, private citizens had to barter with one another, because paper money was totally unreliable. When it came to perishable goods that could not immediately be bartered, such as crops, Americans had no incentive to preserve them. This made it all the more difficult for the government to acquire provisions. That led to the bizarre situation of soldiers starving while crops were rotting in the fields.