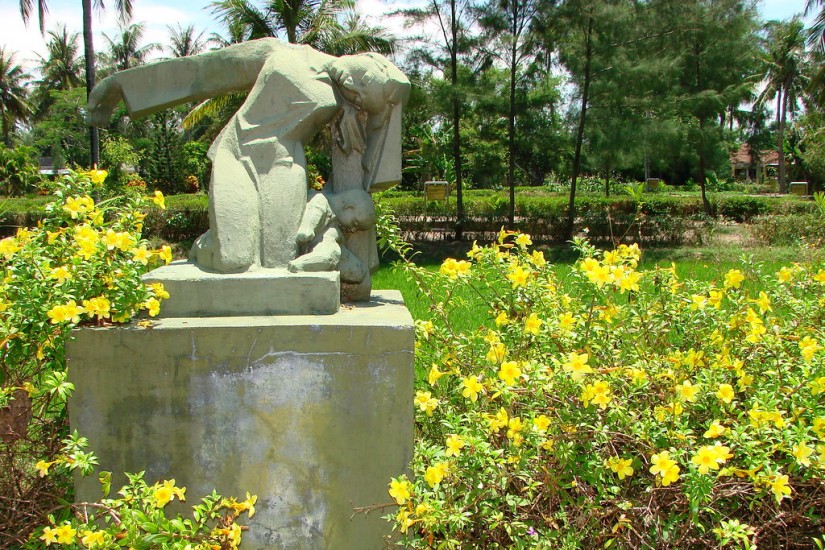 Memorial for the My Lai Massacre in Vietnam.
flickr.com/Adam Jones

President Trump is reportedly considering ordering leniency for several U.S. service members accused or convicted of war crimes. The New York Times reports that Trump has asked the Department of Justice to prepare pardon materials for Special Operations Chief Edward Gallagher, a Navy SEAL accused of shooting unarmed civilians and stabbing an enemy prisoner to death; Nicholas Slatten, a former Blackwater security contractor, who was found guilty of first-degree murder for his role in a shooting incident that left 14 Iraqi civilians dead and 18 injured; Maj. Mathew Golsteyn, who was accused of killing an unarmed Afghan man who had been linked to the Taliban in 2010; and a group of Marine Corps snipers charged in connection with urinating on the bodies of dead Taliban fighters. The pardons, the paper reports, are planned for Memorial Day, a holiday intended to honor those who have given their lives while serving in the U.S. armed forces.

Earlier this month, Trump pardoned former Army Lt. Michael Behenna, who was convicted of unpremeditated murder of an Iraqi prisoner.

We have been here before.

In 1971, a military jury rendered a verdict that a young service member named Lt. William Calley was guilty of war crimes in connection with the massacre at the Vietnamese hamlet of My Lai. Throughout Calley’s trial, there had been massive public outcry proclaiming his innocence. Even if this man had committed the acts for which he had been accused, his supporters said, they took place in the fog of war, and he’d spent months watching his friends be maimed or killed. Two days after he was sentenced to life in prison for murder, then-President Richard Nixon intervened to remove him from prison.

And two days after that, the 29-year-old judge advocate who prosecuted Calley took the extraordinary step of writing the president a letter. That letter is worth rereading in light of Trump’s apparently planned actions. It speaks to our moment and Trump’s contemplated pardons every bit as much as it spoke to Nixon’s clemency for Calley. “I would have hoped,” wrote Capt. Aubrey Daniel:


that all leaders of this nation, which is supposed to be the leader within the international community for the protection of the weak and the oppressed regardless of nationality, would have either accepted and supported the enforcement of the laws of this country as reflected by the verdict of the court or not made any statement concerning the verdict until they had had the same opportunity to evaluate the evidence that the members of the jury had.
…
View on Lawfare
View Connections