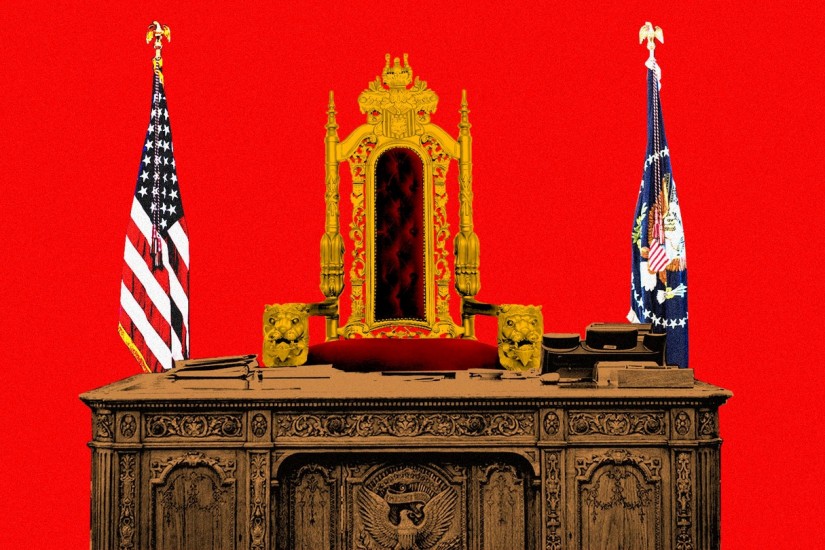 The U.S. constitution displayed on a screen at the Republican National Convention (2008).
Alex Wong/Getty Images
…

Pick a random recent controversy about presidential power, and you’re almost certain to find the president-as-king claim woven into the debates. During the George W. Bush administration, the argument was used to defend the torture of prisoners, the evasion of habeas corpus, and the claim of authority to invade Afghanistan and Iraq without congressional authorization. During the Obama administration, the argument surfaced in debates about the administration’s defiance of a statute recognizing Jerusalem as the capital of Israel and about the use of force against Libya. And supporters of the Trump administration have supercharged the claim, advocating a breathtaking theory of indefeasible imperial prerogative in areas ranging from the Russia investigation and workaday congressional oversight to immigration law and the bombing of Syria.

After years of research into an enormous array of colonial, revolutionary, and founding-era sources, I’m here to tell you that—as a historical matter—this president-as-king claim is utterly and totally wrong. I’ve reviewed more than a thousand publications from the 17th and 18th centuries for each instance of the word root

, and have read most of those texts from cover to cover with the topic of presidential power squarely in mind. I’ve read every discussion of executive power and presidential authority that appears in the gigantic compilation of archival materials known as the

Documentary History of the Ratification of the United States Constitution

. And with the help of a team of research assistants, I’m most of the way through flyspecking the full records of the Continental Congress—including committee reports, floor debates, and delegate correspondence—with the same question in mind.

All this work has left me with both the confidence to share this conclusion and the sense of obligation to do so as bluntly as possible. It’s just not a close call: The historical record categorically refutes the idea that the American revolutionaries gave their new president an unspecified array of royal prerogatives. To the contrary, the presidency that leaps off the pages of the Founders’ debates, diaries, speeches, letters, poems, and essays was an instrument of the law of the land, subject to the law of the land, and both morally and legally obliged to obey the law of the land.

If you had the same third-grade history class I did, you might think this all goes without saying. But in the realm of constitutional law, these findings represent a tectonic shift.