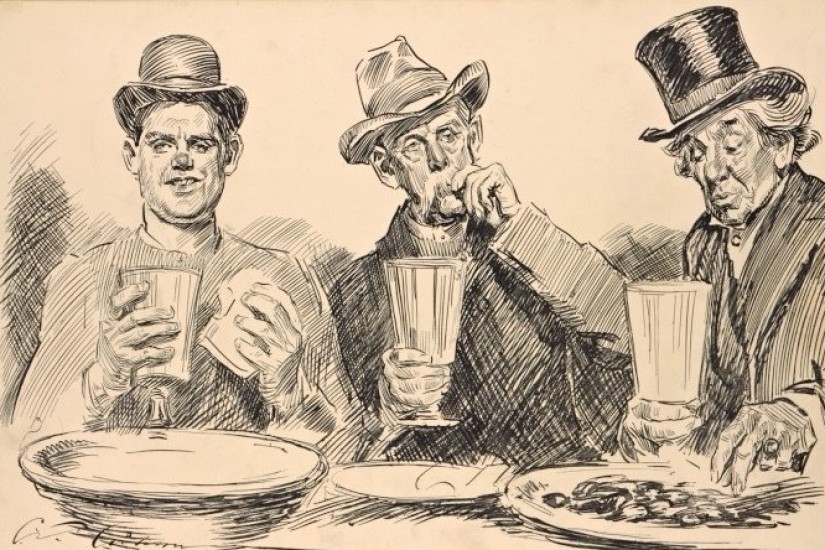 NEAR THE END OF THE 19th century, New Yorkers out for a drink partook in one of the more unusual rituals in the annals of hospitality. When they ordered an ale or whisky, the waiter or bartender would bring it out with a sandwich. Generally speaking, the sandwich was not edible. It was “an old desiccated ruin of dust-laden bread and mummified ham or cheese,” wrote the playwright Eugene O’Neill. Other times it was made of rubber. Bar staff would commonly take the sandwich back seconds after it had arrived, pair it with the next beverage order, and whisk it over to another patron’s table. Some sandwiches were kept in circulation for a week or more.

Bar owners insisted on this bizarre charade to avoiding breaking the law—specifically, the excise law of 1896, which restricted how and when drinks could be served in New York State. The so-called Raines Law was a combination of good intentions, unstated prejudices, and unforeseen consequences, among them the comically unsavory Raines sandwich.

The new law did not come out of nowhere. Republican reformers, many of them based far upstate in Albany, had been trying for years to curb public drunkenness. They were also frustrated about New York City’s lax enforcement of so-called Sabbath laws, which included a ban on Sunday boozing. New York Republicans spoke for a constituency largely comprised of rural and small-town churchgoers. But the party had also gained a foothold in Democratic New York City, where a 37-year-old firebrand named Theodore Roosevelt had been pushing a law-and-order agenda as president of the city’s newly organized police commission. Roosevelt, a supporter of the Raines Law, predicted that it would “solve whatever remained of the problem of Sunday closing.”

New York City at the time was home to some 8,000 saloons. The seediest among them were “dimly lit, foul-smelling, rickety-chaired, stale-beer dives” that catered to “vagrants, shipless sailors, incompetent thieves, [and] aging streetwalkers,” Richard Zacks writes in Island of Vice, his book-length account of Roosevelt’s reform campaign.

The 1896 Raines Law was designed to put dreary watering holes like these out of business. It raised the cost of an annual liquor license to $800, three times what it had cost before and a tenfold increase for beer-only taverns. It stipulated that saloons could not open within 200 feet of a school or church, and raised the drinking age from 16 to 18.