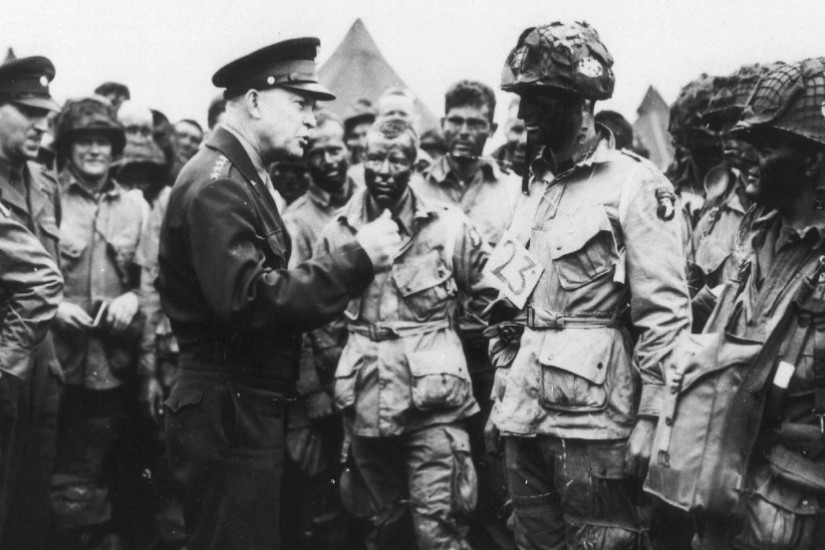 General Dwight D. Eisenhower gives orders to paratroopers in England, just before they board airplanes to participate in the Invasion of Normandy, June 6 1944.
Library of Congress
…

After his trip to Washington, Eisenhower took up his new post in London, where he would oversee the planning and execution of OVERLORD, the invasion of northwest France, and ANVIL, the invasion of southern France. It had taken Britain and the United States two and a half years to have the men and materiel in place to launch an offensive against Nazi-occupied France. In the interim, they had successfully invaded French North Africa and become bogged down in a bloody campaign in Italy. Throughout the spring, American and British military planners attempted to balance the needs of OVERLORD with the demands of ANVIL, while sustaining the Italian campaign. The invasion of France had to succeed, or the Allied war effort in western Europe would be in jeopardy. Given the high stakes, the question of where and how to allocate resources led to intense debates on both sides of the Atlantic.

. . . Judging from the discussions and differences of opinion at the present time the British and American Chiefs of Staff seem to have completely reversed themselves and we have become Mediterraneanites and they heavily pro-OVERLORD. The following are my personal views:

OVERLORD of course is paramount and it must be launched on a reasonably secure basis of which you are the best judge. Our difficulties in reaching a decision have been complicated by a battle of numbers, that is, a failure to reach a common ground as to what would be the actual facilities. As to this the British and American planners here yesterday afternoon agreed that there is sufficient lift to stage at least a 7-Division OVERLORD and at the same time a 2-Division ANVIL on the basis of May 31st. This is an apparent disagreement with the British planners in London, or Montgomery, I don’t know which.

As to ANVIL my personal feeling is this: Do you personally consider that of the combined landing craft thought to be available so much must go to OVERLORD that only a 1-Division lift will remain for ANVIL. If you consider this absolutely imperative then it should be done that way. However, the effect will be that approximately 8 or 9 less Divisions will be heavily engaged with the enemy, Divisions which will be available in the Mediterranean. Can you afford to lose this pressure, considering an additional factor, that we are almost certain to get an uprising in southern France to a far greater degree than in the north?