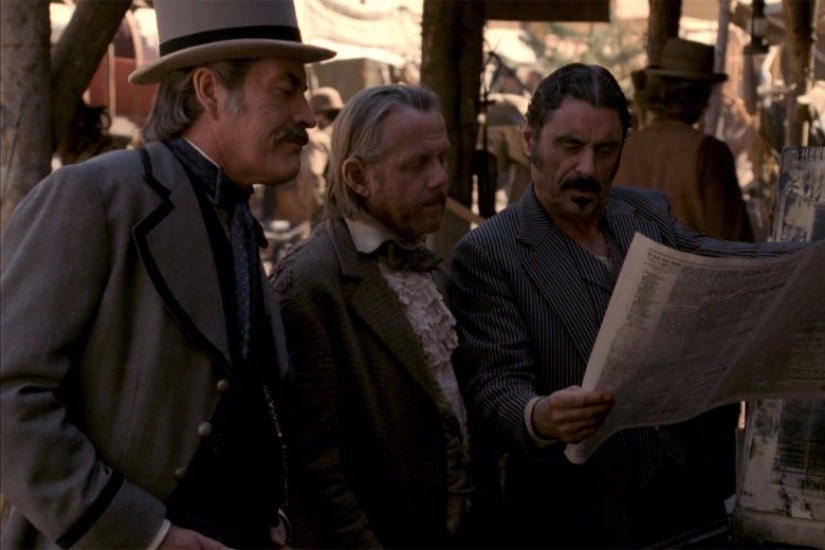 As Deadwood: The Movie gives audiences a chance to reconnect with David Milch’s memorable portrait of an illegal settlement gentrifying its way into legitimacy, it’s a good weekend to revisit an earlier portrait of the Black Hills Gold Rush: The Black Hills Pioneer, Deadwood’s first newspaper. (It’s still around.) The newspaper, like all of Deadwood’s civilizing institutions, has a major role in Milch’s version of the town, and publisher A.W. Merrick, played by Jeffrey Jones, is one of the show’s recurring characters. But the best way to get to know a newspaper is to read it, and in this case, that’s easy enough to do: the Pioneer’s archives are available throughnewspapers.com, starting with its very first issue, from June 8, 1876. It’s an amazing read. On the show, Merrick is something of a fussbudget, which comports very well with the first article his newspaper ever ran, a complaint about the difficulties of running a newspaper in Deadwood:


We issue to-day only a HALF SHEET. Our regular issue will be just double the size of the present copy. But owing to the fact that we are working almost out of doors, with the elements apparently conspiring against us, it is impossible to fill the bill as we anticipated. Our material has been in Deadwood less than a week; our house is not up; it has rained two days during the time, and we think everyone who knows anything about the mechanical work of a printing office will appreciate our condition and bear for the present with the very best it is possible to do. Everybody wants a paper. We propose to give you one, and a good one too, but it takes a little time under the most favorable circumstances to unpack an office and do the work.

Merrick launched the paper in partnership with A.W. Laughlin; after Laughlin left town, he found another partner, who retired in turn after striking gold, but the editorial voice of the paper stayed constant. It reads more like a blog than a modern newspaper: There’s no faux-disinterested “view from above”; the Pioneer is clearly the product of specific people with a specific point of view. Some of those points of view are familiar to a modern reader—anyone living west of the Mississippi will recognize Merrick’s constant grumbling about Eastern newspapers getting the details wrong—but some of them are abhorrent: The paper’s editorial line on the Native Americans whose land Deadwood’s residents were occupying was cheerfully genocidal.
…
View on Slate
View Connections