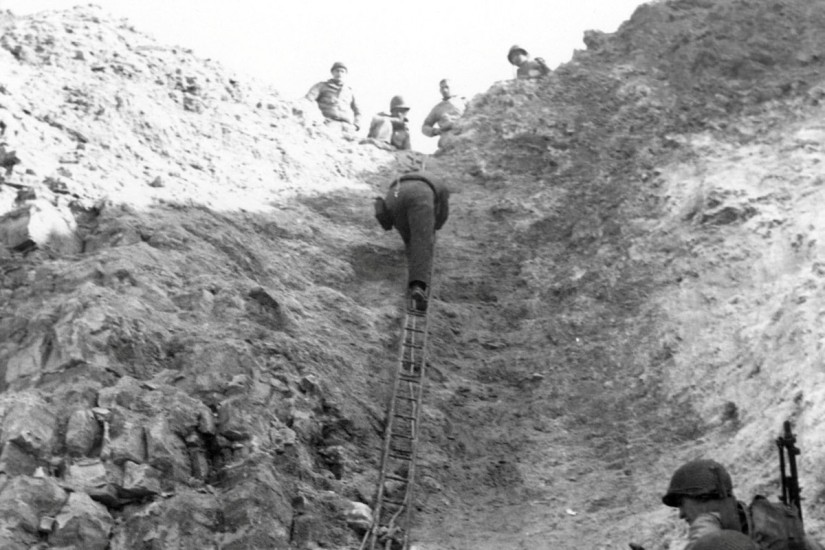 U.S. Army Rangers show off the ladders they used to scale the cliffs at Pointe du Hoc in France on June 6, 1944.
U.S. Navy/U.S. National Archives
…

Seventy-five years ago Thursday, a battalion of elite U.S. Army Rangers scaled the 100-foot promontory here overlooking Omaha Beach, with nothing more than ropes and rickety ladders. As enemy gunfire and grenades rained down, picking them off as they climbed, the Rangers managed to secure the strategic high ground and silence a small battery of long-range German guns that had been moved inland.

The battle for Pointe du Hoc became one of the most heroic moments of the D-Day invasion. It was lionized by the legendary Hollywood film “The Longest Day” and by President Ronald Reagan, who stood on this hallowed ground to one of his most famous speeches, extolling the bravery of the “Boys of Pointe du Hoc” on the 40th anniversary of the largest amphibious assault in the world’s history.

But a little more than three miles down the windswept Normandy coastline, an archaeological dig on a vast swath of farmland is starting to tell another story about what took place that day. A World War II artifact collector and historian accidentally stumbled upon a massive German artillery installation that was buried after the invasion. His discovery, along with a trove of declassified U.S. and British military documents, threatens to alter the narrative of Pointe du Hoc and its importance as a military objective during the D-Day invasion.

Only now are historians beginning to reckon with the implications. Depending on which is talking, the discovery of what is known as “Maisy Battery” either calls into question the wisdom of the entire Pointe du Hoc operation or is simply one more footnote in a war full of footnotes.

One thing is certain: The mythology of Pointe du Hoc is firmly established. Those who challenge the story do so at their own peril.

“Historians always shatter the idol, but let me tell you, when they do, they get a lot of pushback and angry emails in the middle of the night,” said Rob Citino, the senior historian at the National World War II Museum in New Orleans who has written 10 books about the war and only recently learned about Maisy Battery. “Pointe du Hoc is such sacred ground, it’s like bringing someone to Gettysburg and saying, ‘Actually, there was a much bigger battle fought just a few miles away.’