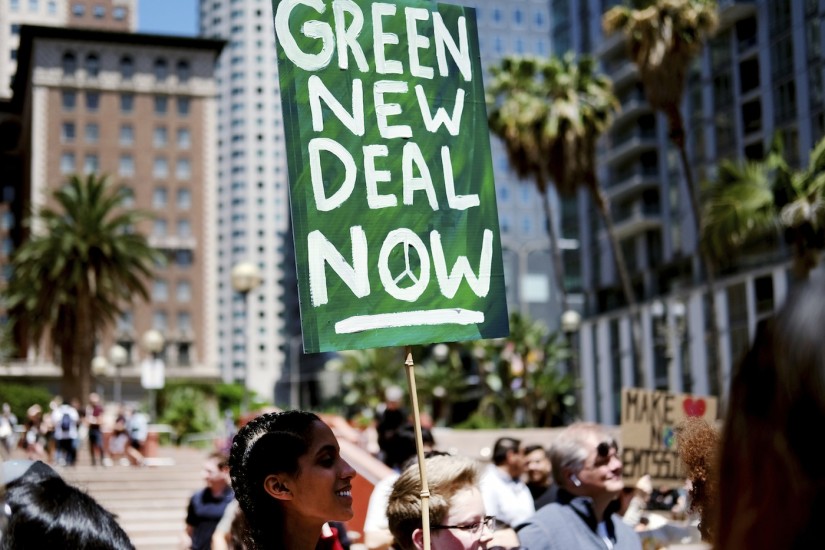 Climate change activists holding signs join in on a rally supporting the "Green New Deal" in Pershing Square in downtown Los Angeles, May 24, 2019.
Richard Vogel/AP Photo
…
In 1991, the economist A.O. Hirschman published a short book, The Rhetoric of Reaction, in which he argued that conservative arguments from the eighteenth to the twentieth century all followed the same basic logical structure and deployed the same rhetorical formulations. It’s hard not to recall Hirschman’s argument as we see conservative opinion already amassing to place the Green New Deal outside the bounds of respectable discourse. Back in the 1930s, the foes of the New Deal repeated their central arguments over and over again, no matter the specifics of the particular legislation then up for consideration. Critics warned that the New Deal would cause permanent damage to the foundations of the American economy. They feared that its measures were hasty and irrational. And once their complaints built to a crescendo, they argued that the flurry of legislation introduced by Roosevelt and the other New Deal Democrats intended to do little more than perform the necessary rescue mission to save capitalism from itself could only result in the creation of a totalitarian state. Squint your eyes a bit at the brewing pundits’ assault from the right on the Green New Deal, and you can see nearly all the same basic structural arguments in play. A.O. Hirschman is long gone, but the rhetoric of reaction sails serenely on, deployed against the nightmare of climate change with the same breezy, repetitive insistence its adherents once rolled out to argue against a coordinated response to the Great Depression.

You don’t have to delve far into the heady days of New Deal reform to run into the brick wall of business reaction arrayed against even the most modest FDR-sponsored measures to mitigate the disastrous fallout of the economic collapse of 1929. Just look, for instance, at the Securities Act of 1933—one of the laws passed during FDR’s first “hundred days.” Judged by both the standards of the times and the scale of the economic calamity of the 1930s, its aims were modest indeed. The act mandated that companies seeking to sell shares to the investing public provide them with basic financial information. And should executives fail to discharge this obligation, the statute ensured that they’d be held legally responsible. The stock market crash of 1929 had exposed financial fraud on a staggering scale; the Securities Act sought to make Wall Street safe for investors once more. In the first flush of New Deal reform, the bill sailed easily through Congress.