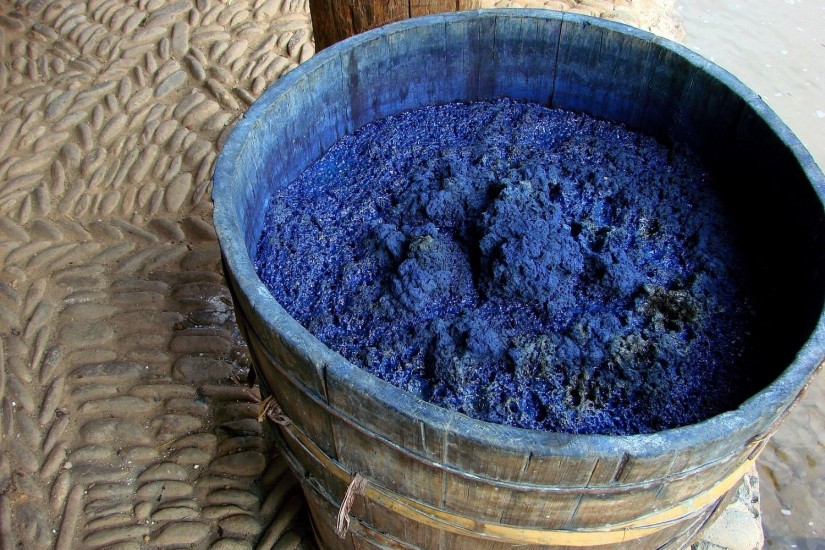 A bucket on indigo dye on a stone floor in Guizhou China, taken in 2007.
Wikimedia Commons

In the second half of the eighteenth century, the Royal Navy sailed the world in service of the expansion and enforcement of the British Empire. Its officers were decked out in a deep blue, now known as navy blue. The rich hue was a recent development, and one that wouldn’t have been possible in previous centuries when the color was more scarce.

"In 1748, the British Royal Navy adopted dark blue officer’s uniforms, which would become the basis of the naval dress of other countries…The blue of seamen’s uniforms, so ubiquitous now as to be taken for granted, is not due to the corollary with the color and that of the sky and sea. The explanation is far more logistical, relating back to the British colonization of India and the expansion of the East India Trading Company after the victory over the French in the Seven Years’ War (1756–63)."

The rich color came from the indigo plant, Indigofera tinctoria, which was native to India, and thus available to the British after they had colonized the country. It had been in use in Europe since the late thirteenth century. “Indigo was then not only plentiful and affordable [in the 18th century], but unlike other dyes was particularly color fast, outclassing other colors in withstanding extensive exposure to sun and salt water.”

Blue dye had existed in England, but it was often made from the flowering plant woad. Even when the more versatile indigo became accessible, there was some resistance to the imported blue, including from the woad cultivators. Historian Dauril Alden notes in The Journal of Economic History that the woad cultivators campaigned aggressively against indigo, declaring:

[it] was properly “food for the devil” and was also poisonous, as in fact it was (particularly to the woadmen). By the end of the sixteenth century, they had succeeded in persuading governments in the Germanies, France, and England to prohibit use of the so-called “devil’s dye.”

Still, they could not hold off the popularity of indigo for long, especially as dyers discovered its potential. “Different textiles required different treatment and even different dyes to achieve a given colour,” writes historian Susan Fairlie in The Economic History Review. Wool is the easiest to dye, while silk, cotton, and linen are each a bit harder and need varying amounts of dyes like woad. “The only fast attractive dye which worked equally on all four, with minor differences in preparation, was indigo.”