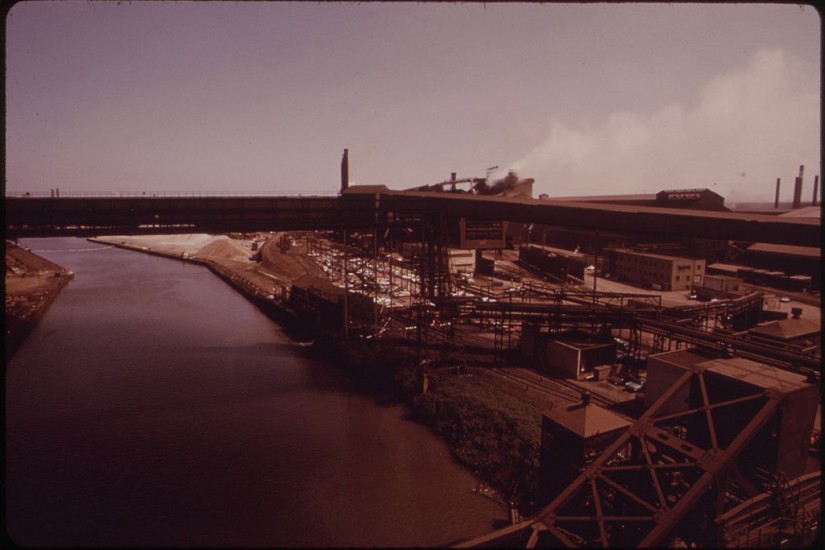 On June 22, 1969, a train crossed the Cuyahoga River near the Republic Steel mill in Cleveland, Ohio. It was a Sunday morning, a little before noon. A spark from the train jumped toward the water. The surface of the river—like many others of the era—was smothered in sewage and industrial waste from nearby industry. The spark met an oil slick and caught fire. The Cuyahoga was ablaze.

The Cuyahoga River, which winds its way through northeast Ohio for eighty-five miles before emptying into Lake Erie, had a reputation. TIME magazine wrote that it “ooze[d] rather than flow[ed].” The low-lying area on the shores of the Cuyahoga, known as Cleveland’s Flats, had long attracted industry, and from the nineteenth century onward, Cleveland’s prosperity hinged on the mills and refineries in the area. But a lack of government regulation allowed the plants to lawfully deposit their refuse into the river. That Sunday morning in June marked the climax of a century of legal dumping.

The 1969 fire was not the Cuyahoga’s first. According to Paul Nelson, historian at the Western Reserve Fire Museum in Cleveland, fifteen significant fires raged across the surface of the Cuyahoga in Cleveland, dating back to the nineteenth century. The relatively small 1969 fire had no fatalities and minimal damage, but it captured the attention of the nation. Seven months after the fire, in January 1970, Congress passed the National Environment Policy Act, which helped establish the Environmental Protection Agency (EPA). This also led to the passage of the Clean Water Act in 1972. Despite the incredible legacy of environmental activism spurred by the fire, the “Burning River” moniker for the Cuyahoga stuck.

In April 2019, two months before the fiftieth anniversary of the 1969 fire, American Rivers, an organization dedicated to protecting the country’s waterways, named the Cuyahoga its “River of the Year.” This would have been unthinkable fifty years ago. For many outside of Cleveland, the fire has continued to define the city. But, as always, the story is more complex than it is often portrayed. I talked with some Clevelanders about the impact and legacy of the fire for the city and beyond.