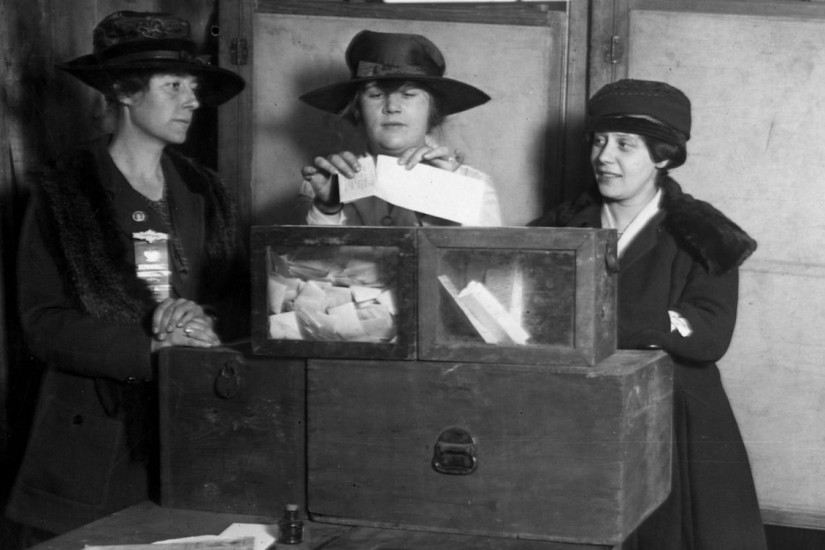 ONE HUNDRED YEARS AGO TODAY, on June 4th, 1919, Congress passed the 19th Amendment to the Constitution, guaranteeing all American women the right to vote—a right they could begin to exercise after the amendment was ratified on August 18th, 1920. But what was voting like in that early period? Below, Miriam Karpilove’s firsthand account of women voting in New York in 1918, when the right had been won locally but not yet nationally, offers a window into the awkward, embarrassing, and emboldening experience of voting as a woman in these early years.

Karpilove (1888-1956) was a prolific Yiddish writer and editor. She was born in Minsk, the fifth of ten children, and arrived in America in 1905. She settled first in Harlem, later in the Seagate neighborhood of Brooklyn, and ultimately in Bridgeport, Connecticut, where several of her brothers lived. She was among the very few women who made their living primarily as Yiddish writers (she supplemented her income working as a retoucher, hand coloring photographs). She wrote hundreds of short stories, belles-lettres, plays, and novels, and served as a staff writer for The Forward in the 1930s.

She was also a frequent contributor to the women’s pages of several leading Yiddish newspapers—sections devoted to covering political and economic subjects as they related to women’s lives. In her writing for these pages, Karpilove often inserted herself (and her wry sense of humor) into her journalistic reporting. Her articles provide intimate portraits of pivotal historical moments and day-to-day life: Jews in Detroit assembling to honor those among their ranks who had joined the Jewish Legion of the British Army and entered World War I on the heels of the Balfour Declaration; Chicago Yiddishists gathering to honor visiting New York Yiddish literati; observations about the shops and fashion of Division Street in New York City.

In this article, originally published in the Yiddish newspaper Di varhayt, Karpilove covers the first election in New York City in which women were legally permitted to vote. In November 1917, women won that right in the state of New York. Women in New York City had their first opportunity to exercise it on March 5th, 1918, when citizens of several districts voted to fill vacancies left by Congressional representatives who had resigned. Although Karpilove doesn’t say so in the article, this was a pivotal election, coming on the heels of Germany’s resumption of unrestricted submarine warfare against the British, at a time when public opinion in the US was shifting toward support for entering World War I. A Democratic win in the special elections could (and did) flip the House of Representatives, giving Woodrow Wilson the votes he needed to enter the war.