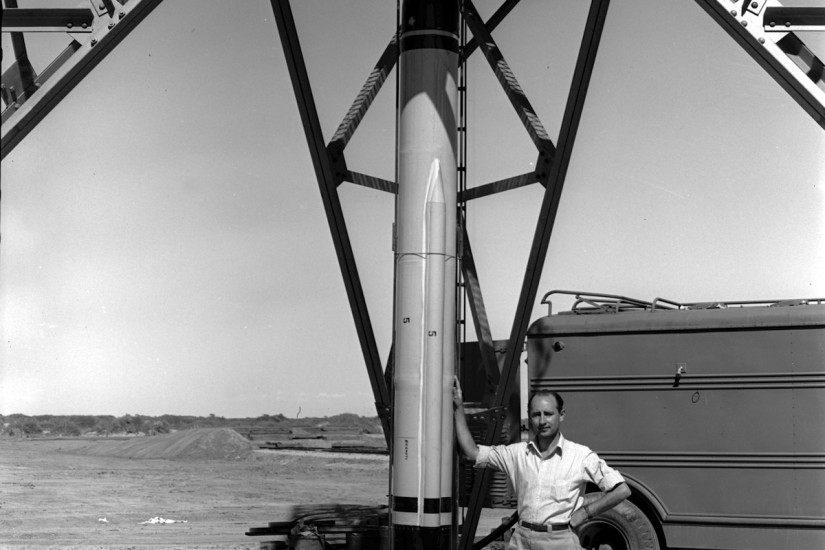 You might not have recognized his name, but Frank J. Malina is among the most important figures in 20th-century science. His life is central to the bigger story of how humans first reached beyond the boundary of Earth, yet it has been obscured by the politics of the mid-20th century. In part because of a decades-long campaign of surveillance and harassment, both Malina and the pioneering rocket he created have vanished from the pages of history.

Malina was the first US rocketeer to achieve the main purpose of rocketry—high-altitude flight. Of course, building such a complex system is never the work of just one individual, but Malina was the architect of America’s first successful liquid-propellant rocket, the WAC Corporal. The reclusive Clark University physicist Robert Goddard is known as an early pioneer with liquid fuel, but he never came close to the “extreme altitudes” that were his own stated aim. Malina’s WAC Corporal rocket owed no design debt to Goddard’s, and it soared 27 times higher. In collaboration with the self-taught chemist and occultist Jack Parsons and aerodynamicist Theodore von Kármán, Malina also helped develop solid-fuel rocketry, another mainstay of contemporary space flight. If we put aside the Nazi engineering team that built Hitler’s V-2 (many of whom became born-again Americans), it was Malina’s initiative and leadership that transformed early rocketry in the United States from fantasy to science.

Malina occasionally turns up as a bit-part player in other people’s histories—not least those of the charismatic Parsons. But he is weirdly absent from so many accounts of the Space Age. Take, for instance, Walter A. McDougall’s Pulitzer Prize-winning The Heavens and the Earth: A Political History of the Space Age. It is one of the most authoritative histories of space exploration and yet, across 500 pages, it has more references to Bob Dylan than to Frank Malina. This is very strange. The institutions Malina founded have been crucial to human achievements in space for over 70 years. His Jet Propulsion Laboratory (JPL), for instance, is now a NASA research center with 6,000 employees that daily pushes back the frontiers of autonomous space exploration. Those amazing hi-res pictures of Martian terrain? Many are from JPL’s Curiosity rover; by 2020 a new JPL mission will assess the habitability of the red planet. It’s precisely because these institutional legacies are so enduring that our curiosity might usefully explore the secret struggles that were part of their genesis.

One of Frank Malina’s most important contributions was a paper he published in the Journal of Aeronautical Sciences with his colleague Martin Summerfield. “The Problem of Escape from the Earth by Rocket” detailed for the first time the mathematical criteria for “multi-staged rocketry,” a strategy by which a rocket achieves high altitude by dropping pieces once it has finished with them, so that it gets lighter as it ascends. Though the efficiency of rockets has since improved immeasurably, staged rocketry has remained the standard means of reaching orbit for over half a century.