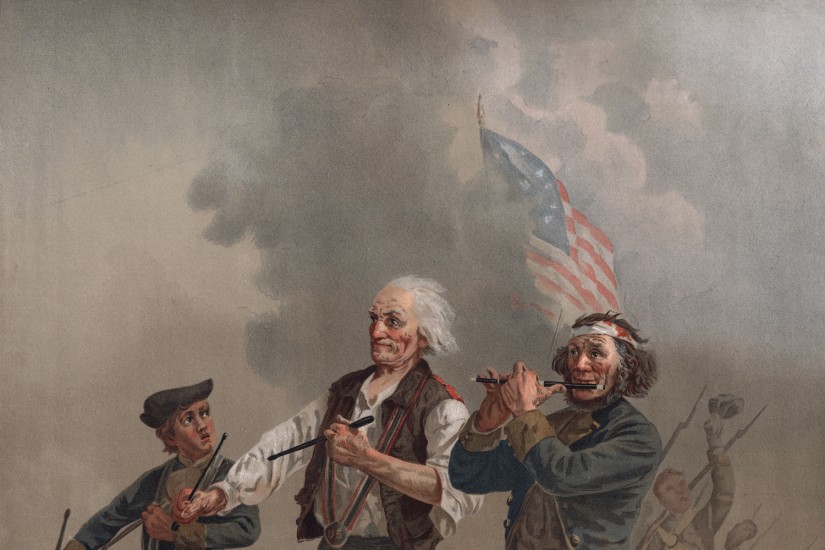 Originally entitled Yankee Doodle, this is one of several versions of a scene painted in the late 19th century that came to be known as The Spirit of '76.
Archibald Willard/ Wikimedia Commons

The Fourth of July celebrates a declaration of war between two factions of a capitalist ruling class. By 1763, decisively victorious in its most recent war with France, the British Empire stood on the threshold of myriad possibilities: Who would control the profits of this victory, and how would the imperial state marshal its resources? The path preferred by the coalition of planters, merchants, and lawyers who signed the Declaration of Independence in 1776 was one of investment over retrenchment, conquest over peace, and, for the most part, slavery over anything that threatened it. On the horizon, they saw land just waiting to be seized, sold, and shaped into “a mighty empire” of their own.

But the American Revolution could never just be a war between capitalists. Needless to say, most of those who did the fighting and dying — not to mention those who labored to make warfare possible — were workers and smallholders. Mobilizing these men and women, waging war on a scale hitherto unknown to the colonies, necessarily required the promulgation of sweeping and transformative ideas and institutions. It depended not only on the consent but on the active, sometimes fervent commitment of many ordinary colonists. Winning that commitment meant holding out the promise of a “new order for the ages,” a participatory republic in which the rights of “the people” — in practice, white men —would be secure forever.

A bitter civil war raged across the thirteen colonies and out along their edges, kindling a politics of emancipation and collective self-government — and not just for white male property owners. This war created the conditions for mass uprising among enslaved people, and for new alignments and coalitions among Native peoples in the ambit of imperial violence. It led wives, daughters, servants, and apprentices to question their subordinate positions in colonial society. Through their participation in collective action, men and women reforged old relationships and generated new identities that resonated with the possibilities of freedom, within and beyond the United States. However fractured and contradictory, those emancipation struggles helped shape the new nation and its neighbors.